After a hard day’s doctoring (well, three home visits isn’t bad), I drove the trusty Nissan Pajero down the bumpy track to Mushroom Lodge, where I am billeted. It was almost five o’clock and the sunlight was honey-coloured and gorgeous. I passed a track off to the right, signposted “Elephant Loop”. It looked so inviting that I couldn’t resist, and turned off. The track was definitely the “road less well travelled”. It was more rutted and bumpy than the road to the lodge. After 100 metres, the track entered a cutting, with high-sided walls, leading to a stream. I stopped the car to watch and wait.

Three hamerkop birds flew in and stood in the stream, fishing with their spear-like beaks. These birds have a curious head, shaped like a hammer, hence the name. They have dark brown plumage and long legs. I watched them catching silvery tiddlers in their beaks for ten minutes until there was a commotion in the sky. Several small birds were mobbing a large raptor. The raptor sought refuge in a tree at the stream’s edge. Through the binoculars I identified it as an adult African Harrier Hawk, with its small head, yellow face, light grey back, and white barred tail. 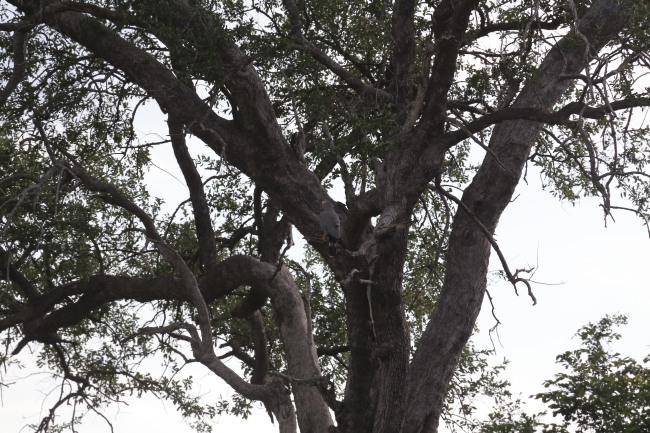 This was fun. I was really enjoying myself when I heard a baboon warning call. These calls are different depending on the threat. I was hoping that a leopard was going to come down to the stream to drink. I scanned the edge of the forest with my binoculars, but couldn’t see anything out of the ordinary. I glanced in the rear view mirror, and saw a massive elephant, about twenty metres away, lumbering down the track towards the stream. There was another elephant following behind it and I became seriously worried.

I quickly went through my options. What was that saying, “Never get between an elephant and the river”? No, that was hippos, not elephants. The elephant was too close for me to reverse out of the cutting, it might think I was attacking it. If I stayed put, the thirsty elephant might push the vehicle aside or into the stream. If I drove away across the stream, the elephant might think I was retreating, and pursue me. I might even get stuck in the muddy banks of the stream.*

I decided to drive slowly forward, through the mud, across the stream and up the other bank, intending to demonstrate strength of purpose, not weakness. Once the vehicle reached the crest of the bank, I drove on for fifty metres, before turning round to see if I was being followed by irate elephants.

Question “What is the best thing you have seen from a car?”

Answer “No elephants in my rear view mirror”

So the first part of the track’s name was true to form. There were elephants. Was the track going to loop around? I pottered around for a few kilometres, photographing puku, yellow-billed and saddle-billed storks and eventually returned to the track close to the stream again. I drove tentatively to the edge of the stream and looked carefully for elephants, but they had gone. I crossed the stream and got back onto the main track to the lodge, thinking I had had a very close shave.

* The correct procedure was to remain still and allow the elephants to pass me, according to the experts.