12° 53′ 51″ S, 31° 56′ 53″ E. These are the precise co-ordinates where Phyllis came to a gradual halt. I was doing an emergency home visit to see a patient in Lion Camp, about 42 km from the main gate. The engine cut out and I glided to a halt. The power steering failed, making it difficult to pull off the narrow track. It was 16:40 on Sunday afternoon and I was in a bit of a pickle. There was no cell phone coverage this deep into the South Luangwa National Park. I didn’t have a radio. I sat in the car and contemplated my fate.

Emma, the Lion Camp manageress, had called me out for the medical emergency, so she knew I was coming. I had told Mushroom Lodge where I was going. But as the tracks are not signposted, I could have strayed far from the route. The best advice I had been given was to “keep the river on your right”. Surely they would realise when I hadn’t appeared by 17:00 that something was wrong and they would send out a search party, eventually. Until then I just had to sit and wait.

But I didn’t. I clambered onto the roof of Phyllis and took a good look around. Nothing but what Dr John Seaman used to call “MAMBA” – Miles And Miles of Bloody Africa. But no lions, so far so good. Sadly, I am not the best spotter of predators and the dull, grey-brown of their skin perfectly matches the colour of the dusty earth. The Hollywood pride could be within 30 metres, perfectly camouflaged.

Maybe I could get Phyllis’s engine started again. I turned the ignition, the engine whirred and clattered to a halt. It sounded like there was no fuel, but the gauge showed a good quarter tank. I opened the bonnet and had a look at the engine. It was totally bewildering. Where was the line feeding petrol to the engine?

I remembered the words of the bloke who used to service my old Volvo. I had told him what I thought was the problem. He said, “Stick to diagnosing people, let the expert mechanic diagnose what’s wrong with your car.”

The red oil pressure light had come on, so I checked the dipstick. Plenty of oil. A few days ago, something fell off the bottom of the engine, stopping various belts from working. It was replaced, and I checked the belts were all tight and in position. Not that I could do much if they weren’t; I wasn’t wearing tights.

So what was around me? Through the bushes to my right was a lagoon. Animals come to drink water at sundown. Lions and leopards set up ambushes near watering holes. Stay in the car, then. Check the rear view and side mirrors to see if any predators are creeping up to use Phyllis as a hiding spot before pouncing on unwary antelopes.

Listen for noises. Was that a baboon alarm call? Cape Turtle Doves incessantly cooing, “Work Harder, Work Harder.” Or at this time of day, “Drink Lager, Drink Lager.” No hippo grunts, leopard coughs or lion growls to be heard. Just the swishing of wings as a group of black headed herons fly over my head into a big ebony tree to roost in the topmost branches. Then silence. That gave me an idea. Perhaps if I make a noise, anyone in the area will notice. I parped out S-O-S in Morse code on the car horn. Three long, three short, three long – or is it the other way round? But if people were in the vicinity, they would be driving in a vehicle and I’d hear their engine, which would also drown out the sound of my horn.

Does anyone remember those team building awaydays, popular when the NHS had a bit of money a decade ago? The team exercises designed to give insight into group decision making? “Your plane has made an emergency landing in the desert, and luckily you have survived unhurt. Which three of the following articles will you take with you?” Lightweights chose the bottle of coke. I picked the raincoat. And no one picked the shaving mirror, which would be idea for flashing to alert passing aircraft. Ah, how about removing that daft mirror on the front passenger wing to help with parking to flash passing aircraft? Come to think of it, I haven’t seen an aeroplane for nearly three months, so that’s a non starter.

This was not the time to get maudlin and morose. Why don’t I keep my pecker up by playing some music? What’s on my MP3 player? Leonard Cohen comes up at random. Not such a good idea, spin the dial again. Just what I needed, Rod Stewart singing American classics, “S’Wonderful, S’Marvellous.” Check the time. I’ve been here just 30 minutes.

But where exactly am I? My new Canon 6D has a GPS feature. I normally keep it off because it drains the battery quickly, but I switched it on, took a snap of the sunset and read the data. 12° 53′ 51″ South, 31° 56′ 53″ East. Now I know where I am. I get the map out of the glove compartment and work out that I am just three kilometres south west of Lion Camp.

Walkable? Yes, but would I survive? I have Andy’s super strong Lenser torch, but apart from blinding any lions by the side of the track, it just would show them where I was. Bad idea. I’d just have to stay here until they sent out search parties. I could manage a cosy night in with Phyllis. There were two cans of mosquito repellent in the glove compartment. I’d be alright.

Then I saw dust ahead. It was the best view I had had from a car since seeing Slough in my rear view mirror on the M4. A vehicle drew up and stopped, waiting for me to get out of the way. The Zambian driver thought I was just some tourist, parked up to watch birds and the sunset. He looked annoyed and pulled off the road through the bush and passed me. I waved at him through the window, “I can’t move. I’ve broken down.” He nodded but just drove on. “Oi! I need help. Can you radio Lion Camp and tell them the doc is stuck at this location?” I think they heard.

Emotional roller coaster, or what? I reclined the seat and went back to my music. About twenty minutes later, Gavin from Lion Camp arrived with a gang of lads. They rigged up a tow rope and pulled me gently towards safety. I could not express how grateful I felt. At least now I could get to minister to the sick patient.

A kilometre down the road I saw a grizzly sight – the remains of a buffalo killed three days ago by lions. They hadn’t eaten since and were hungry. After another kilometre, I was towed past the Hollywood pride of lions, sitting majestically a few metres from the side of the road. Their eyes followed my vehicle as I rolled past. “Another missed meal.” 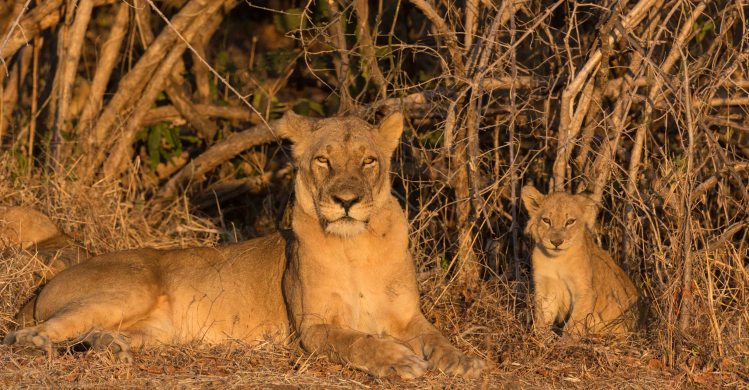