Every February, Swazi people gather fallen marula fruit (“emaganu“) to make an alcoholic drink called “buganu“. Marula fruit are the size of large crab apples. As they ripen, they turn from green to creamy yellow. To make the brew, women wash the fruit, peel off the skin and squeeze out the juice (“kuhlabela“). After adding half as much water as juice and sugar, the liquid is left to ferment in a vat. The longer it ferments, the more alcoholic it becomes. The leaders of women’s groups (“lutsango” means women’s regiment) present the bugano to the Queen Mother, Her Majesty the Indlovukazi (the great she-elephant) at the royal residence in Ebuhleni. The following day, the King arrives and, after the royals have had a drink, it is party time for their subjects.

Yesterday, along the roadside in Manzini, there were groups of women dressed in identical uniform, trying to hitch a ride to Ebuhleni. They wear black skirts, with a colourful top tied over one shoulder with an epaulette of goat hair on the other. They sport a fetching hairnet and wear bands of dried seeds around their ankles when dancing. They carry a small staff, sometimes a wooden spoon or a metal strainer spoon.

This is a festival for the women, as they are the ones who prepare the booze and dance for the King. Men do attend, but not as a group (“emabutfo” means men’s regiment). They wear a similar wrap, tied over their shoulder, but have an animal hide attached to a belt round their waist. The men carry a knobkerry. Lots of other men wear normal clothes and join in the drinking.

I went to the ceremony yesterday and it was a blast. Policemen were stationed along the route to Ebuhleni. “Just in case there are terrorists trying to ambush our King”, explained my driver. Several times we were overtaken by a group of four black BMW SUVs, lights a-flashing, travelling at dangerously high speed. One of these carried one of the King’s 14 wives and her children, flanked others containing police bodyguards.

Ebuhleni is a small town in the northern province of Hhohho. There is a supermarket, a petrol station and not much else. But outside the town there is the royal residence, with kraal and parade ground, where the festival was being held. The driver dropped me off and immediately I felt totally out of place, surrounded by thousands of women dressed in their colourful regalia.

I chatted to some ebullient ladies who might not have observed the custom to wait until the King had drunk the first draught of marula beer before partaking themselves. They were all wearing a necklace with two squares of beadwork attached. This was the emblem of the Royal Swaziland Police. “Don’t worry, we won’t arrest you,” they laughed. Interestingly, all the ladies in this group maintained they were unmarried. They all had smart phones and wanted me to pose for photographs. I didn’t give them my full name so hopefully I won’t be trending on Twitter or have my smiling face tagged in uploads to Facebook this weekend.

Luckily, I was rescued by an interviewer from Swaziland TV Channel S. He was bare-chested, wearing a goatskin attached to a Dolce & Gabbana belt. He began recording an interview with me using a Sony camcorder, asking what I was doing here, what did I think was going on, did we have this kind of ceremony in UK. After a minute or so, a drunken man decided it was his turn for 15 seconds of fame. He clapped an arm round my shoulder and contributed to the interview in a slurred voice.

I made my excuses and walked up the hill, into the royal encampment. The lutsango were massing by a cattle kraal and I saw a photo opportunity coming on. I was stopped in my tracks by another inebriated man who said that it was “women’s business” and I should not go any further. I crossed the road to talk to him about this tabu and he then told me I should not have crossed the King’s path. I was not correctly dressed. It seemed I couldn’t do a thing right. He harangued me for a while until a handsome gentleman in traditional dress motioned him to stop. This was the local MP. Thank you, Mr Sikhumbuzo Apton Ndlovu, Honourable Member of the House of Assembly (Timphisini Inkhundia). I also met one of the local chiefs, who sported red feathers in his hair.

The King’s entourage arrived, but the side windows of all the cars were darkened, so I couldn’t see him. I did see a group of five white folks (Brazilian, Swiss and British) so I went over for a chat. Apart from us and the Ambassador for the European Union, I saw no other whites at the ceremony. Just as I was making conversation, a half-naked dusty old man started pulling at my shirt asking for money. I wondered who he was until I recognised him as a man passed out under a tree whom I had photographed. The white folks moved away while I dealt with the situation. Eventually I detached his grip, mumbled my excuses and left to get in position to photograph the lutsangos dancing en route to the parade ground.

I managed to get into the parade ground but, not being an honoured guest, I couldn’t get close to the King or the shaded area for dignitaries. I had to pass through a metal detector doorway, but it can’t have been working because I was carrying my camera and no flashing lights went off. I couldn’t get close to the dancers either, so I took some photos of the spectators.

A man working for The Swazi Observer newspaper (motto “Revived, Reliable and Read”) was giving away free copies so I took one and read about last year’s ceremony. Rather cheekily, the paper featured a picture of members of the Royal Family listening attentively to the King’s speech, next to another picture of white diplomats looking less riveted (one was shown playing with his smart phone).

As their alcohol consumption increased, the ladies were becoming more bold and friendly. I was invited into the back of a Kombi for a bit of slap and tickle by two rather forward young ladies. In my innocence, I didn’t even think a cash transaction could be involved. Another man offered me his girlfriend, who was wearing a miniskirt with a fringe of plastic cords which swished when she sashayed. Again, I declined. 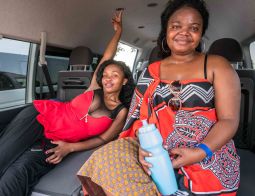 A group of men and women beckoned me over and challenged me to guess what SPTC (they were all wearing the logo) stood for. “Ehrr, Swaziland Post & Telecommunications?” I ventured. The prize for this successful answer was the hand in marriage of a middle-aged lady who appeared not to understand a word of English. I kept on smiling and refusing in the most polite way possible. Altogether I had five proposals of marriage during the afternoon. 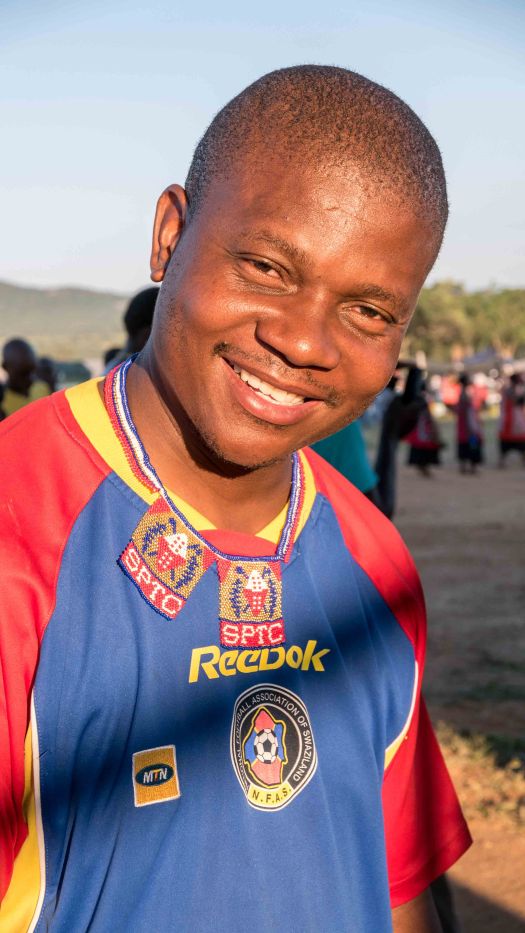 What a contrast to the tailgate parties we have outside Twickenham before Six Nations matches!

As the light faded, I wandered past ladies selling little cardboard plates of cold chips, plastic shrink wrapped apples, fluorescent orange plastic bags containing frozen drink (any reader old enough to remember Jublees?), animal skins, beadwork jewellery and sweets. No one was selling marula beer; everyone had brought their own. It wasn’t even seven o’clock and already one poor lady was slumped against a wall, breasts akimbo, chin lolling onto her chest. 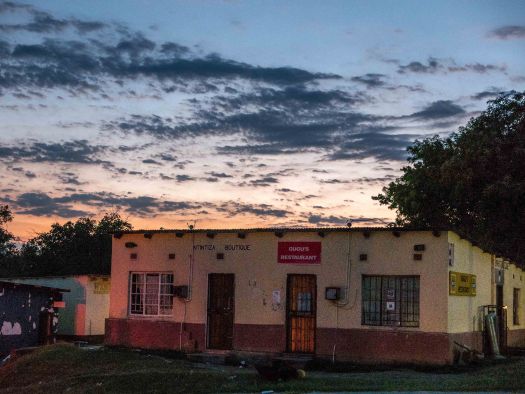 I reached the town and needed a drink. What better than a bottle of marula-flavoured fizzy water? I wanted to cross the road at a zebra crossing because I have heard of pedestrians being fined on the spot for jaywalking. A cop was conducting traffic when a police car drove up and handed him a beverage (surely not buganu?). He took a break from directing traffic and sat on a concrete block at the side of the road. I chose my moment well, and crossed with a mass of locals.

A reliable source told me that some time ago, a man accused of drink driving had successfully been reprieved because earlier he had been drinking marula beer with the King. As a result there was a rumour that no driver would be breathalysed by the police on the main road for the day of the festival. This contrasts with an advertising campaign in the newspaper: “Where do you want to sleep tonight? In your bed, in a prison bed or in a grave bed. Don’t drink and drive.”

I leaned against the hot wall of a concrete bus shelter, drinking sweet fizzy water, waiting for my ride home. I reflected on the afternoon. Was this mass alcoholic binge just an officially sanctioned way to allow women to let off steam, to break rigid social rules, just once a year? I understand that a prodigious amount of sexual activity goes on throughout the evening. The driver said that he would never allow his wife to come to one of these events because “she might get a taste for it.” After the festival, the normal social order is restored, no questions asked about what happened at Buganu. 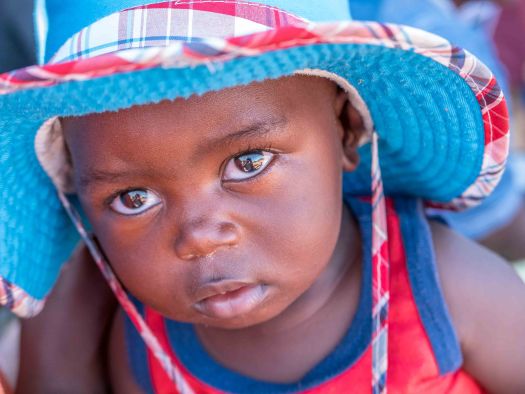 In my free newspaper there was a joke:

At their 50th wedding anniversary, an old man asked his wife about their youngest child.
“My dear, there is something that I must ask you. It has always bothered me that our tenth child never quite looked like the rest of our children. Tell me the truth, I must know. Did he have a different father?”
The wife hesitated and finally said, “Yes, he did.”
The old man was shaken, and with a tear in his eye he asked, “Who was the father?”
The wife mustered up her courage and replied, “You.”