As the nominal head of teaching at Matsapha Comprehensive Health Care Clinic, my boss asked me to attend a workshop run by the Swaziland Nursing Council at the Tums George Hotel. All nurses have to attend ten hours of continuing professional development (CPD) in order to renew their registration. The old log book system is being phased out and replaced with an online register database. It is the job of the trainer to upload the credits for each nurse they have trained.

The workshop to teach us how to use the register began at 9am. When I arrived at five-to-nine, just three of the twenty invitees had already taken their seats. There were a few IT gurus sorting out cabling and wi-fi. These “techies” were easily recognisable by the massive size of their laptop screens and their ponytails. Just like UK, really.

By 9:30am, a few more participants had arrived. The workshop organisers decided to start with a prayer, followed by introductions. In the absence of the official who was supposed to be providing the opening remarks, we skipped down the agenda and had a snappy, animated PowerPoint presentation overview until mid morning tea break beside the hotel swimming pool.

Apart from tea, there was a tray of tasty sandwiches (egg and bacon toasties, cut into triangles), just in case we had missed breakfast. A few more participants turned up at the tea break, so by 11am about half the places had been filled.

We did some practical work using a dummy database recording CPD for fictitious nurses. Selected trainers had to use the laptop connected to the projector, so we could all see what they were doing on the big screen. It was clear that this was not going to be easy for some of the educators, many of  whom had trouble controlling the mouse and clicking on drop-down lists. For some reason, the training manual had been reduced to A5 size and the font size of the examples was tiny, about 6 point. Even those presbyopic educators wearing spectacles had some difficulty in reading the text. But we managed.

The last participants rolled up just in time for lunch. I asked the distinguished Ugandan lady, who is the Registrar, about nurses who only attend part of a training session. She said that they should be awarded CME points just for the hours they attended. Lunch and teabreaks were included as these provided time for learning by networking. 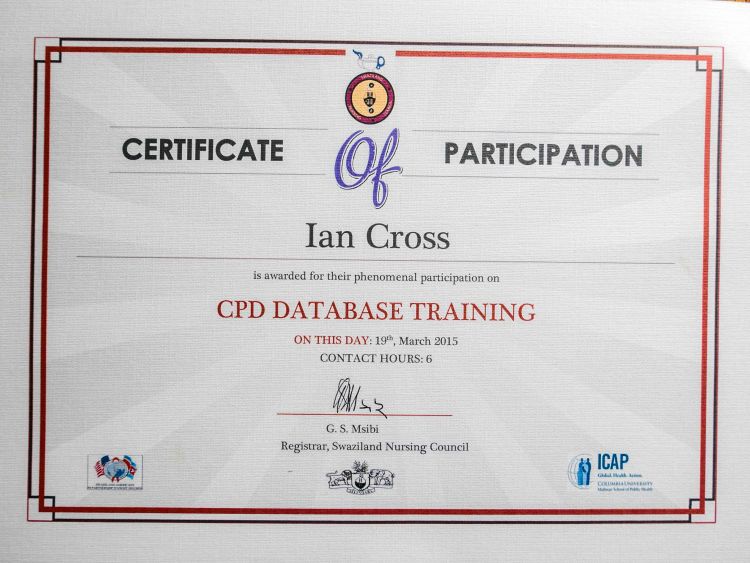 At the end of the workshop, we had an official ceremony at which the registrar presented us with our certificates. This was recorded by one of the “techies” with a digital camera. The template for the certificates had already been designed, just needing our names to be added. The last nurse who had arrived very late, held out her hand for the certificate, but the Registrar refused to provide it.

“Change these six hours of CPD to three hours for this nurse,” said the Registrar to the “techies”. There was a sharp collective intake of breath from the participants. No more Madam Nice Nurse.