This annual event at Malkerns Country Club was so popular that it sold out on both nights. Judging by the guffaws from the audience, everyone really enjoyed the show. There were twenty-five sketches and musical numbers on the programme, but it felt like more. In many cases, the costumes could best be described as “fancy undress”. 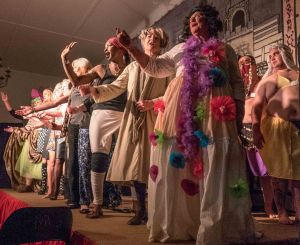 We had spicy butternut squash soup as a starter, then the show opened with “There’s No Business Like Showbusiness.”

Half way through, there was an interval to eat roast bellypork, rare roast beef, roast potatoes, creamed spinach and a selection of veggies, followed by apple strudel and cream. 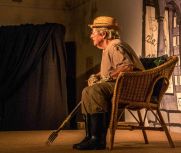 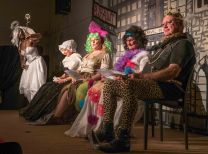 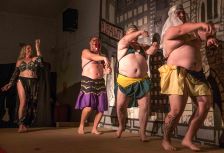 Each table of eight had two bottles of South African wine, one red and one white, but it would have taken a lot of Dutch courage to get me up on stage half naked. The Beer Belly dancing was particularly grotesque. The marriage of the Preying Mantises was rather predictable. Cinderella featured a black fairy.

The elderly lady getting drunk while wearing a pith helmet was 80 and was about to leave Swaziland to be with her relatives in Johannesburg. Sadly, she was leaving behind in Swaziland all her friends from the past twenty seven years.

The jokes often poked fun at well known members of the community. “Fred Bloggs was bitten by a rabid dog the other day. It took two day’s of hospital treatment before they could discharge the dog.”

Many of the gags were “The Two Ronnies” vintage. Four candles or fork handles, anyone?

I particularly enjoyed “You can ring my bell,” sung by Anita Ward (top of the pops in 1979). Three characters on stage remained completely still until the chorus, when they opened their costumes and flashed the audience. Their genitals were covered with kitchen pots and a wooden spoon on a string hung between their knees. It must have required a fair bit of practice to propel the spoon to the pot, using a brisk pelvic tilt, perfectly in time with the beat.