No, this is not how to mix a cocktail of cider and lager. I am discussing envenomation. Swaziland is home to over sixty species of snake, but only seven are likely to do you serious damage.

Judy Chovan asked me on Facebook how to deal with snakebite. The correct answer is to avoid being bitten in the first place. Stay clear of snakes, well clear. Mozambique spitting cobras can squirt their venom eight feet. Don’t hassle snakes, let them escape. They don’t want to pick a fight with you as you are too big to eat. Snakes have poor eyesight but can detect movement, so stay still. It isn’t a good idea to try to kill a snake. If you are close enough to whack it, you are within its strike range.

There are two reasons why you shouldn’t handle a dead snake.  Some snakes play dead as a defence mechanism. Even when it is dead, the snake can still bite and inject venom as a post-mortem reflex. (In South Sudan in 1980, a boomslang fell out of a tree onto a chair while we were sitting around a campfire. I was so shocked that I hacked both the snake and the chair to death with a machete. The head was still gaping and closing for an hour after it had been severed, so I put it into the flames. Do you remember, Geoff Collins?)

It is common sense to wear decent shoes and long trousers when walking in the bush during spring and summer. Don’t put your hands into holes and be careful when messing about with a woodpile or compost heap.  Use a torch to light your way if you are walking outside at night. Keep the grass in your garden cut short. Put up screens on doors and windows to prevent snakes from coming into the house seeking shade. Snakes eat rats, mice, frogs, small birds. Where you have chickens, you get rodents, so keep the coop away from the house and store feed in closed containers. Where there are weaver nests in a tree, there is bound to be a resident snake, looking to eat fledglings. And don’t forget to look in the toilet bowl before you sit down. My worst nightmare.

Right, let’s say you have been bitten. It might seem an impossible request but try to keep calm. The snake may not have been venomous, or if it was, it may not have injected a significant amount of venom. Most people haven’t a clue what type of snake bit them. Venomous snakes tend to be longer (four to six feet), rear up and make a hood (cobras) or inflate their neck, have bands/bars/stripes on their body (Mozambique spitting cobra and rinkhals), hiss and open their mouths wide. Don’t try to catch the snake for identification purposes, you will only get bitten again.

Tell someone you have been bitten and get help. If there is some water available, pour it over the site of the bite to wash off any venom that hasn’t been injected. If you have been bitten on a hand or foot, remove your watch, rings, shoe before any swelling occurs. Draw a circle around the bite if you have a pen. Note the time – by writing it beside the bite if possible. If you do not know what kind of snake bit you, apply a pressure bandage and keep calm. Inform the hospital that you are coming. Don’t cut and try to suck out the venom. Don’t apply ice or lotions/potions. Keep calm and as still as possible.

Identifying the snake is often impossible, but a bit of local knowledge will help:

Puff adders are short, fat snakes that are active at night. They might appear sluggish as they don’t immediately slither away when disturbed, but that is part of their defence mechanism. They actually have the most rapid strike speed of any snake. They usually hiss fiercely and make an “S” shape winding up before striking.

Mozambique spitting cobras are active both day and night. They are inquisitive snakes that will enter homes. They rear up, spread a hood and spit or strike. If they strike, they may do so repeatedly. Some Swazis think that the second strike sucks out the venom from the first strike, but this is wishful thinking.

Rinkhals live in cooler climatic areas of Swaziland. Its defence mechanism is to play dead, often turning onto its back. It rears up when threatened, and spits or strikes.

Snouted cobras prefer hot climates. They are very aggressive and active in the daytime. The Swazis don’t distinguish between rinkhals and snouted cobras.

Black mambas are thin, grey-coloured or brown-coloured snakes, which can reach 8 feet in length. To defend themselves, they rear up alarmingly high and open their jaws to reveal a jet-black oral mucosa (hence their name). They hiss and can strike multiple times. It might seem strange, but their bite is not painful.

Cytotoxic venom destroys tissues and initially causes painful swelling. This may proceed to necrosis, or tissue death, resulting in the loss of a digit or an ulcer requiring surgical intervention. (Mozambique spitting cobra, puff adder, rinhkals)

Haemotoxic venom stops the blood from clotting. It can take upto two days before the effects become evident. You bleed from every orifice. Vomiting, mental confusion and sweating are common. (Puff adder, boomslang, vine snake)

The treatment should counter the effect of the venom. For example, it is vitally important to slow down the transit of neurotoxic venom into the bloodstream and to the central nervous system. Pressure bandages or tourniquets are very effective at buying you more time if you have been bitten by a snouted cobra or black mamba. You need a wide elasticated bandage. Start beyond the bite and wrap the bandage tightly up the limb towards the heart. Adding a splint to the bandage is helpful. Don’t remove any clothing and keep still. For bites on the hand, use a sling.

The treatment for cytotoxic envenoming is just the opposite. If the venom is restricted to the bite site, it causes much more damage. You need to dilute the venom by spreading it around your body. If you have been bitten on the hand, lift it up above your head, move it around for five minutes. Do not apply a pressure bandage.

The more astute readers will realise that rinkhals have a venom which has both cytotoxic and neurotoxic effects. The latter is more life-threatening, so apply a pressure bandage.

Haemotoxic envenoming takes longer to appear, so the patient should be in hospital.

Two snakes in Swaziland spit venom when they are threatened (Mozambique spitting cobra and rinkhals). Their range is about twice the length of their body and they aim for the eyes. Venom sprayed onto flesh is harmless, just wash it off. If it gets into your eyes it stings worse than chillies. Rinse with copious amounts of water for twenty minutes. Don’t rub your eyes. You do not need antivenin but you should visit a doctor to check your eyes and to get some antibiotic eye ointment.

Antivenin is produced by injecting repeated tiny doses of venom into a horse without killing it. The horse’s immune system produces antibodies to the venom. It is polyvalent – meaning the horse is exposed to several different kinds of venom – so it can be used in situations where the snake is unknown. The local antivenin has been produced for decades in South Africa, where Mozambique spitting cobras are less common. Its venom was added to the mix more recently, but it is not as effective. I understand that a specific monovalent antibody is in preparation to treat this venom and should be available next year. (In Swaziland, 80% of serious envenomation is caused by the Mozambique spitting cobra.)  There is also a monovalent antivenin for boomslang bites, but this rarely occurs.

Antivenin is given in hospital, intravenously, before any tourniquet or pressure bandage has been released. As the serum is horse protein, allergic reactions are common, so give prophylactic adrenaline intramuscularly (0.25ml of 1:1,000 for adults, 0.01ml/kg for children). Most doctors inject the antivenin via a peripheral line, 10ml per minute. You should get some improvement after 15-30 minutes. If you don’t, then you probably haven’t given enough.

Neurotoxic effects of envenomation will start to improve 30 minutes after adequate treatment with antivenin. However, once respiratory paralysis has begun, you need to begin artificial respiration by whatever means available. Antivenin just reduces the time this is required. Some victims have survived 12 days of respiratory support and have made a full recovery.

Antivenin has a shelf-life of three years, but it is so expensive that in Zambia, I have kept supplies in a refrigerator (NOT a freezer) well past this expiry date as long as the liquid has not become turbid. If using out of date stock, it is wise to assume some diminution of potency. Here in Swaziland, there is a co-operative scheme where families will buy a single vial of polyvalent antivenin which is kept in a central location, along with the stocks from many other families. In the event of someone being bitten, this antivenin is used, and the stock is replenished by the victim’s family, to keep a “float”. If you leave Swaziland, you could “sell on” your antivenin to a new arrival.

Good Shepherd Hospital is a private mission hospital in the most snake-infested part of Swaziland. They use up antivenin so quickly (they see 40 snake-bitten patients a month in peak season) that it has been possible to trade stocks which are a year from their expiry date for new antivenin. Thank you, Good Shepherd!

Haemotoxic envenomation is treated by transfusing blood and blood products to keep pace with loss.

MSF used to keep antivenin in Matsapha clinic, but as we have no inpatient beds, and Raleigh Fitkin Memorial Hospital is just 20km away, we no longer stock it. That relieves me of a big responsibility, but I’m occasionally called upon to treat the after-effects of cytotoxic envenomation (thank you for your advice, Professor Joe Dias).

This child was bitten twice by a snake when she was in bed at her granny’s house in a rural area. She needed intensive physio to get some movement back into her finger joints. 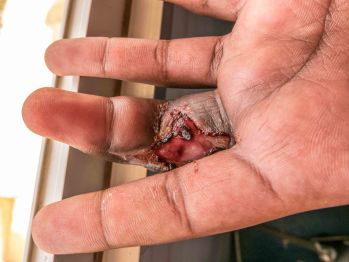 For this posting, I am extremely indebted to Thea  Litschka, who runs the Antivenom Swazi Foundation. She gives a great lecture, well illustrated with slides. She also runs an annual course on snakebite for medical staff in Swaziland. Check her out on YouTube, “Black Mamba, White Witch”, especially the part where she removes a black mamba from a hotel bedroom.