Fast forward a week from the previous post and I am back in Kwaluseni, but this time with forty-one female local leaders and opinion formers. There were only two dozen ladies there when we arrived at the community centre at 10am. We weren’t quorate by 10:30, but we kicked off regardless. After a prayer, we began with introductory remarks. Rather foolishly I tried to crack a joke. Swazis are very literal people and don’t normally understand my humour. Nevertheless, I said I wasn’t bothered so much about having fewer participants as last week, because that meant more cow hooves and head for the rest of us. Just as I said this, my translator’s cell phone chirped, and he stopped to take the call. My orphaned joke was left stranded in mid-air.

The weather took a turn for the worse. A gust of wind rattled the metal windows and snapped the ripped tarpaulin over the outdoor meeting area. As the rain started to drive in from the north, I saw another group of ladies hurry towards the community centre to join the meeting. We had to rearrange the chairs and bring in a couple of benches to seat the newcomers. But the bigger group seemed to lend itself to more lively discussion. After two hours, we had exhausted the subject  of sexual and gender based violence. People were getting hungry. The rain had stopped and the sun came out as we filed out to get lunch. 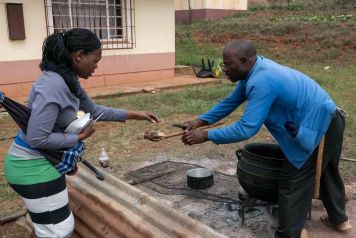 Last week’s cow head and hooves had been stewing in a massive cast-iron cauldron for hours. The sturdy lid bore the name “Falkirk”. When I took a peek inside, I was disappointed. The hooves were still hairy. An off-duty community policeman helped to serve up the portions. At least, I think he was off-duty. He still had handcuffs and a baton attached to this belt, even though he was not in uniform. 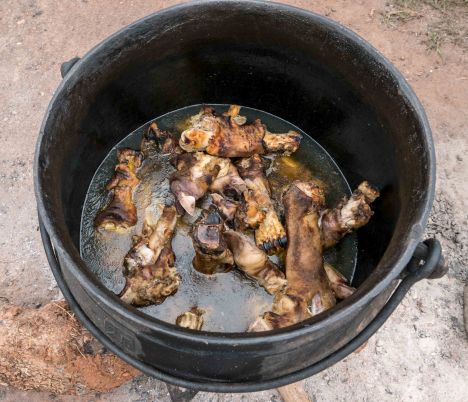 I tore off a strip of plastic wrapping to hold my share of the cow. I could see it was a knuckle, with rubbery straps of ligament attached. There was no actual meat. I chewed and sucked, but couldn’t find a way into the joint. It tasted and smelled dreadful. The two psychosocial counsellors with me pretended to be excited by the cow, but when it came down to it, they didn’t eat any. My share went into the back of the LandCruiser and proceeded to attract a cloud of flies.

Back at the clinic, I did my Lady Macbeth impersonation, scrubbing away at my hands trying to expunge the reeking odour of stewed cow bones. Like her, not very successfully.

“What did you think of the cow hooves, Doctor Ian?” the staff asked.

I replied, “Well, in England, we call this offal. And this offal was awful.”