The double sea kayak just didn’t want to go in a straight line. Robin was the powerhouse in the rear, I was up front, trying to establish a nice gentle rhythm with some steady, regular strokes. The rudder’s wiring had been disconnected, so it should have been Robin’s responsibility to steer. But he was more interested in pulling the paddle through the water as strongly as he could. He favoured his left side, so we were moving to the right, to starboard.

“I hate kayaking,” he said. “This always happens, I go round in circles.” I confined my paddling on the right side, to counter this clockwise motion. The other girls in our party seemed to be doing really well, without anything like effort we were expending. At least the sea in the bay was calm and the visibility was good. I could see the two sandbanks ahead and the channel between them. Beyond the sand, there was a fringe of mangroves around Ihla de Inhambane, where we were going to have lunch.

We beached on the sandbank and changed positions. There was no support for my back and I was getting painful cramping spasms in my left leg. So we switched places again, but this made matters even worse. Finally, the guide gave us his kayak. This actually had a functioning rudder, but it was loaded with all our provisions on board. The heavy dry bag, containing our cameras and electrical gadgets, was fastened to the top of the kayak with elastic ropes, making us unstable. Robin kept trying to take video and photographs with his Go Pro camera on a selfie-stick, making us even more unstable. 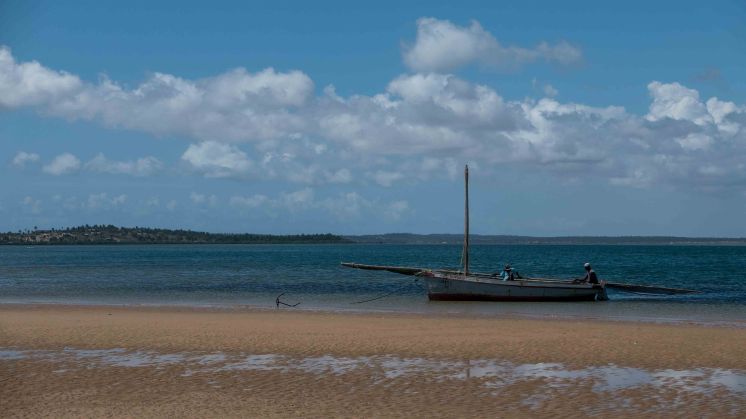 The current between the sandbanks was vicious, and predictably, the kayak flipped over. “I’ve lost my Go Pro,” Robin said. “And my sunglasses.” I dragged the kayak onto the sand and rummaged around in my bag for some swimming goggles. I swam out to the spot where we had capsized and dived down to look for Robin’s camera and sunnies. The undertow was so strong that it was dragging me out to sea. The Go Pro was a Gone Pro. But Robin didn’t want to give up. It wasn’t so much the camera, but he didn’t want to lose precious recent video footage and images on its SD card.

During this drama, the girls were collecting sand dollar shells, known here as pansy shells. We should have been having a snack on the sand bar, but our bread was soggy and the biscuits had turned to porridge. The fish enjoyed our mid-morning snack.

Wisely, we chose to make the rest of the journey by dhow. More precisely, it was a cargo badan. The captain tied the kayaks to the stern, set the patched lateen sail and we left for the island. It was low tide by now, so we had to walk 250 metres to a gap in the mangroves to get ashore. Chief Eric greeted us and started preparing lunch. A guide showed us around the island. We visited the Methodist and Catholic churches, but the health centre and school were deserted. It was 1pm on Friday; the nurses and teachers had left for the weekend on the mainland.

Lunch was ready when we returned to the chief’s compound. It was a bit of a crab and carb-fest: chips, rice, pasta and bread. Eric also served scallop soup and a spicy chicken stew. The vegetable was a porridge of kale and crushed groundnuts, called matapha, which was very tasty. As we ate, there was a peal of thunder. We stopped chewing and looked at each other, thinking, “Did everyone else hear that?”

We were surrounded by tall coconut palms, so could only see a small patch of sky. There was no inkling of the dark, malignant cumulus clouds piling up to the north-east. Nevertheless, we decided to pack up and get back on the dhow as soon as we could to return to Barra on the mainland.

As we walked to the water’s edge, it was clear that a major storm was brewing. The clouds on the horizon had turned dark blue. There were forks of lightning stabbing down from the sky. The wind was picking up and dhows were scurrying back to the shore. It started to rain, icy sleet which stung my face and exposed limbs. A Danish couple got on board their dhow to try to escape, but after a few minutes, it gybed when the captain rounded into the wind too far and almost capsized. They returned to the shore and we abandoned our plans to sail, choosing to sit out the storm back at Chief Eric’s compound. 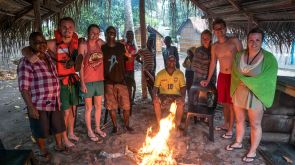 We were soaked to the skin and cold. The chief arranged for a fire in a palm-frond roofed gazebo for us to warm up. We tried to dry our towels and flimsy beachwear, while Mozambique jazzy pop music blared from a boom box with flashing lights. Eric showed us some of his dance moves. One lad managed to dance while sitting in a chair. A crowd of locals gathered around to check us out. We were plied with drinks and snacks of shellfish. I now know how to cook a blue swimmer crab; just throw it on the fire until the shell turns dusky pink.

Two hours later, the storm had moved south but it was still too dangerous to try to cross the bay. We telephoned Tofo, but they could not launch their zodiac inflatable motorboats. The lodge at Barra had sent all their sailing staff home for the afternoon. We were going to have to spend the night on the island. Marooned. 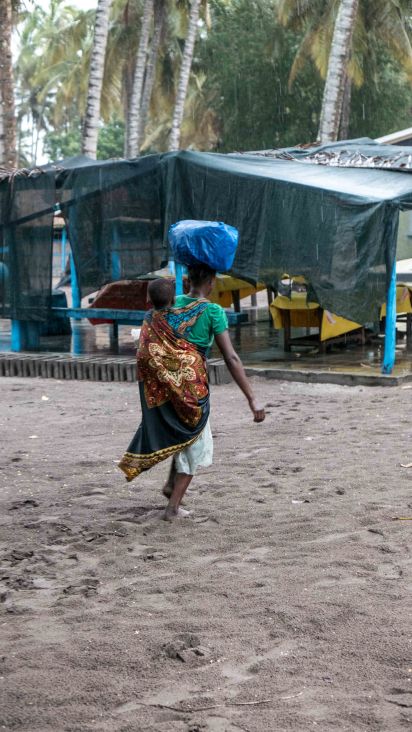 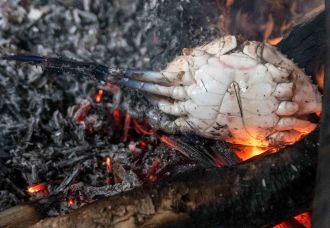 Chief Eric rubbed his ample belly and said that we were fortunate. He had two wives, and the first wife was away on the mainland seeing relatives. He offered us the use of her house, which we gladly accepted. We were shown to the toilet facilities – there was a special place for number 2s. Number 1s you just did anywhere away from the huts.

The storm veered back north, towards the island. Eric cooked dinner for us, exactly the same food as we had for lunch. We sat around the fire again, listening to pandza and marrabenta until the boombox batteries failed. It would have been wonderful to hear an Inhambane xylophone (mbila) group, but there were none on the island. Someone produced a bottle of Coca Cola and two small bottles of local rum called “Two Punches”. I wondered if this was because of the first hit you got when you drank it, followed by a second blow from the inevitable hangover the next morning. (How do you say “Cuba Libre” in Portuguese?)

One of the locals came and sat next to me, trying to make conversation in Bitonga. He was suffering from a mental illness, explained one of Eric’s family. I wonder why he came to sit next to me? I am not claiming that I exude empathy, but perhaps he could tell that he would not get the cold shoulder treatment. It is great to see how inclusive, tolerant and supportive small communities are in developing countries.

We turned in at about 10pm, some sleeping on mats sharing a blanket, and as the eldest in the crew, I got the marital bed. Most of us managed a few hours sleep until the roosters started crowing at 4am. I was up and about by 4:30. My clothes were still damp when I dressed.

The boatmen got the dhows ready, rigging the sail and hauling up the anchor. We dragged the craft into deeper water and clambered aboard. It was 4:50am, not yet dawn, and the air was completely still. We were becalmed. The boatmen produced two long bamboo poles from the bilge and started punting us away from the island. For a long time, Chief Eric waved us goodbye from the shoreline as we inched away going embarrassingly slowly. By the time we got out into the channel, the bamboo poles could not reach the seabed, so we used kayak paddles for propulsion. After an hour or so, the wind picked up and we made slow headway over to the mainland. 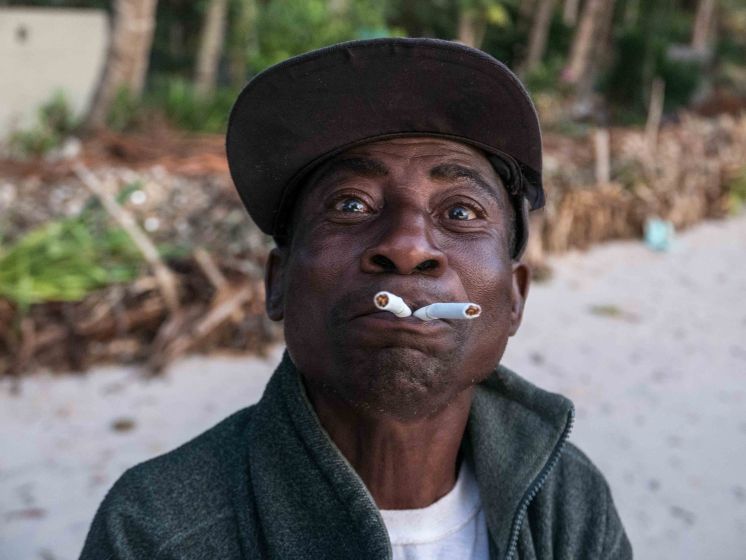 It was high tide, so the pickup truck was parked a mile away from where we made landfall. By now it was 7:30am and the sun was starting to get hot. We drove back to Barra in the back of the bakkie, exhilarated by our adventure.

Just think of what might have happened if we hadn’t spent half an hour searching the seabed for Robin’s Go Pro; we might have left earlier and could have been caught in the middle of the bay in a tremendous storm. We were already aware that eight local ladies had been drowned three days previously, when they were picking cockles from the sand flats as the tide came in. Only three bodies had been recovered by the time we left for Swaziland. Eric was correct; we were fortunate.