With a long queue of patients waiting to be seen, consultations tend to be brief and functional. Closed questions predominate, rather than open ones. Gogos, who have been starving prior to their fasting glucose blood tests, are keen to get home for breakfast with their medication. But when we are fully staffed, there is less pressure to deal with patients quickly. Sometimes, allowing patients to ramble on telling their stories makes it easier to get to the nub of the matter and to discover what they are really bothered about.

Last week, during one consult, I was spending a lot of time writing. I had to record my findings in the patient’s notebook, add basic data such as blood pressure, weight, glucose and medication to my NCD database, and finalise the prescription. While I was occupied, my interpreter was chatting with the patient. When I’d completed the paperwork, I interrupted their conversation. I explained again about the changes I made to her medication and told her when I’d like to see her again.

As she walked out the door, I turned to the translator and said, “Did you think she looked depressed?”

The translator replied, “She has ten children, but only one who looks after her. That is what we were talking about.”

“Fill me in on the details, tell me what happened.”

“I didn’t get the whole story because you broke into the conversation, but it seems the one who is helping her did very well in school, but instead of getting a conventional job, he became a sangoma,” she said.

A sangoma is a witchdoctor or traditional healer, depending on your point of view. Obviously he is doing well because he can support her financially. I wondered why he didn’t sort out her diabetes and hypertension. Perhaps he abides by the General Medical Council’s advice in “Good Medical Practice” and declines to treat a family member.

A young man was referred to me by one of the nurses because he was a “complicated case”. He had told her that he had a heart problem when he was a child and now his heart problem had come back. She didn’t have a clue how to deal with this.

Before I set eyes on him, I was thinking about the complexities of adults who have survived congenital heart defects. But he had not needed surgery and he didn’t know his diagnosis. All he remembered was frequently being taken by his gogo (grandmother) to the clinic with “heart problems”, receiving medication but not getting better.

“Why did your gogo take you? Where was your mother?” I asked.

“She died when I was seven, and I had to go to stay with my gogo in Siteke,” he said.

“Did you have any special tests, such as Xrays?” I asked.

“No, they just kept giving me different medicines which didn’t help,” he replied. “The pain just went away by itself. But it came back a few weeks ago.”

I asked him to tell me more about his pain and he said it was as though he had a wound in his heart, which was burning through to his backbone.

I asked him to take off his shirt and went through the rigmarole of a full cardiovascular examination, including the fancy bits, such as testing for tactile vocal fremitus (“Say ninety-nine”), percussing the borders of the heart, listening for bruits in the main arteries. The Full Monty. Sometimes I do this when I am playing for time to think. Other times, the detailed examination demonstrates to the patient that I am taking him seriously and using all my skills to detect what is wrong.  On this occasion, it was a bit of both.

“Years ago, in my country, we thought that all our feelings and emotions came from the heart. Is it like this in Swaziland?” I asked him. He nodded so I went on, “Do you remember what it was like when your mother died?”  He spoke about this for a while and then said, “Do you think my heart pain was caused by my losing my mother?” I said that it could be that he was so distraught that he felt the emotional pain in the left side of his chest, where he thought his heart was.

“So was my heart broken?” he asked.

“Not literally. It probably just felt as though it was. The stress of bereavement can cause physical pain which hurts just as much as a broken bone.” I stopped talking and waited for this point to sink in, before asking him, “Have you suffered a recent loss?”

He told me he had broken up with his fiancée a few weeks ago, before the chest pain restarted. Then he said, “Do you believe in witchcraft, docotela?”  I replied that although I personally did not believe in it, I understood how important it was to many Swazis. “They believe it exists, it is powerful and it explains many things which would otherwise be seen as random or coincidental. That belief can be so strong it can make some people ill.”

“I went to see a sangoma,” he told me. “But he couldn’t help. He said that I had been affected by a spell which was meant for someone else, and this made it difficult to put right.”

“How did that happen?” I asked.

“I must have stepped over some ‘muti’ where I was not supposed to be walking,” he replied. I thought this was a bit like the plot of A Midsummer Night’s Dream.

“Let’s consider what could be causing your pain,” I said. “We’ll start on the outside and work our way in.” Skin, soft tissue, muscle, rib, cartilage, pericardium, heart, pleura, lungs and finally getting to the stomach.

“Sometimes people describe the pain of an ulcer or an inflamed stomach lining as ‘burning’, which can seem to move through to the back.” He agreed that this was a possible diagnosis and I prescribed a course of omeprazole, to reduce the gastric acidity.

“Job done,” I thought to myself as he walked to the door. With his hand on the doorknob, he turned and said, “Will this medicine counter the ‘muti’, docotela?” I smiled at him and said, “We’ll just have to see, won’t we?”

Mother and child in the clinic. They are not featured in this blog. 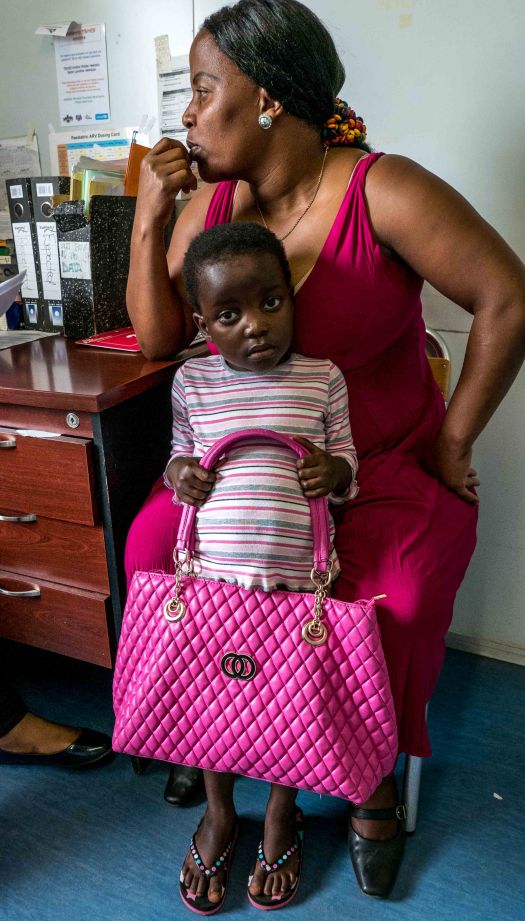 After working with me for almost a year, my translator has learned a few of my tricks. When an embarrassed young man shuffles into the consulting room, avoiding eye contact, she ignores his opening gambit of a “headache”, and turns to me and raises her eyebrows. She knows the routine way I take a sexual history, breaking down the barriers with a bit of humour, accepting that condom use is the exception rather than the norm, and using local terms for genitalia and common sexually transmitted diseases. When telling the patient that it is important that sexual partners attend for treatment, she offers half a dozen “contact slips”, not just assuming a single partner.

It reminded me of one Lothario from the past, who asked the clinic to provide a kombi to collect and bring his ladies for treatment. Prolific and profligate, I bet he was getting some help from a sangoma.