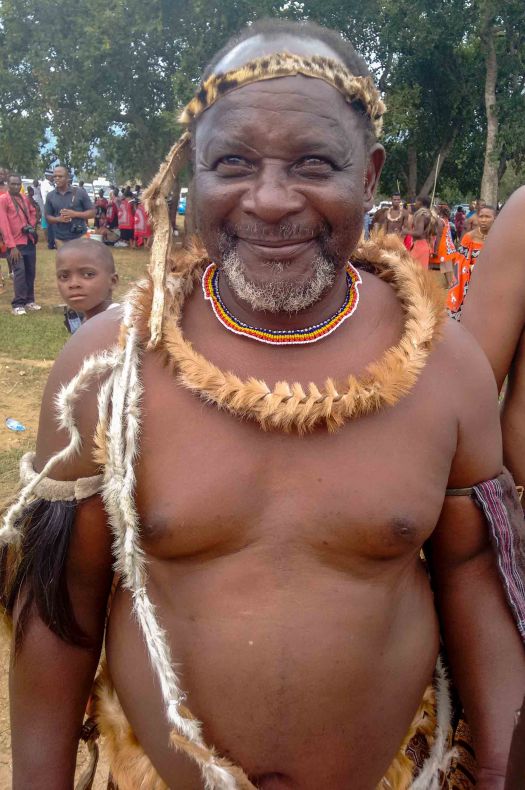 The ceremony begins when King summons young bachelors to collect a sacred bush called lusekwane. They have to march 50km to the site, where they lop off  branches under the light of the full moon, which this year was at Christmas.

The next day, elders weave the freshly-cut branches between the poles of the King’s hut.

On day three, the lads collect a red-leafed shrub called imbondvo, which is added to the mix. The sacred bull is allowed to escape from the kraal; the boys have to capture it and bring it back to the enclosure.

The main events are staged on day four. All men dress up in traditional warrior outfits, with sticks instead of spears. Women wear their lihiyas, and maidens go bare-breasted. Inside the sacred enclosure, everyone dances and they carry out sacred rituals, such as throwing the sacred gourd, the liselwa, into a crowd of young men, one of whom catches it on his shield. 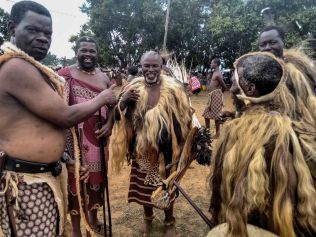 The King retires on the fifth day in seclusion. Royal policemen, called bemanti, patrol the village during daylight, making sure no one does anything taboo, such as having sex, shaking hands, singing, dancing, sitting on chairs or mats. Even having a good scratch is prohibited.

On the final day, the King’s regiments collect firewood to make a bonfire in the kraal. Objects from 2015 are burned in the conflagration, symbolising the end of the old and start of the new. There is more singing and dancing, until rain puts out the fire. But the weather forecast says no more rain until the weekend, so it is going to be a long party.

We attended on the main day, which was a public holiday. Even the supermarkets were forced to shut down (a few years ago, one was heavily fined for remaining open on such an important day). Our driver told us that the ceremony started at 9am. Having lived here for almost a year, I realised that this was very optimistic, so we arrived at 10.30. The senior policeman in charge of the road block at the Palace Gates was one of my patients. He greeted me by name and waved us through into the VIP area. However, it seems we were not important enough and a more senior official dispatched us back to the public car park about half a kilometre from the kraal.

We wandered about, watching people eat hard pap and barbecued meat from styrofoam containers, trying to get some shade and taking some photographs of men in warrior garb. By 12:30 we were getting hungry and someone told us the dancing would not start until at least 3pm. So we went home and I rustled up cheesy scrambled eggs on toast for our group. We had the remains of Ann’s plum cake a la mode for dessert and got back to Ludzidzini by 3:30pm. Still nothing happening. 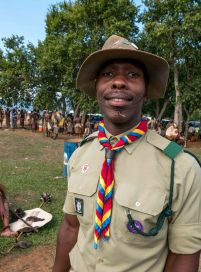 At 4pm people started going through security, a metal detecting arch. I don’t think it was switched on, but it looked good. We were told we could bring in no cameras, phones, watches or anything metal (apart from keys). Inside the parade ground, another official told me that I had to take off my shoes. A paramedic walked past me wearing boots. “What about him? I’m a docotela, too!” I said. “He is on duty,” said the minder. Saying,”I’m on duty 24/7, too. Just ask Jeremy Hunt!” didn’t cut any ice. We took the shoes back to the perimeter fence and left them outside with Ann, Yuan and Sellah. 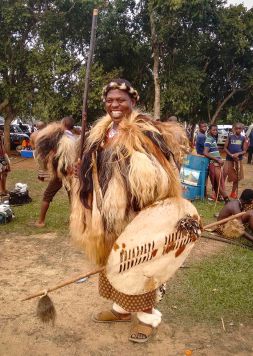 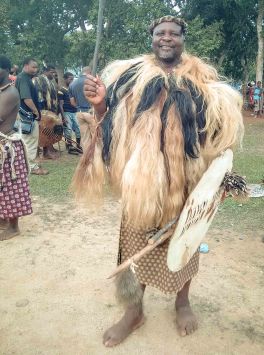 I met another patient as we entered the Royal Kraal, the enclosure where the dancing and rituals were to take place. I was just getting started, feeling the rhythm, shuffling my feet, when another official told me that we could not stay, for some unspecified reason. I thought the better of asking him, “Is it because I is white?” Obviously not, as my companion, Andrew, is a black Kenyan. We were dispatched to the outer perimeter. Perhaps we had not made enough effort with our wardrobe.

The ladies were allowed in and ushered to one side, where they were shown the dance moves. I wandered around, taking photographs in the public area outside the Kraal. One self appointed arbiter of custom law decided to report me to two policewomen for taking pictures inside, but I was innocent.

The silver-helmeted soldiers of the Royal Guards paraded outside the Kraal waiting in the heat to be inspected by the King and a flurry of courtiers, all dressed in warrior garb. Although the King was 200 metres away, a soldier dressed in camouflage scanned the crowd at the perimeter. He looked like a steward at a Premier League match, watching for any disturbance among the fans. Only he was carrying an automatic weapon. 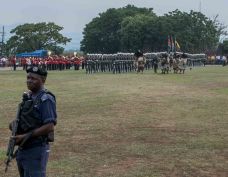 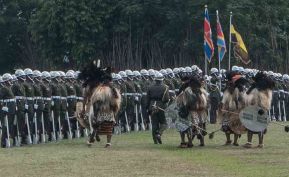 By now it was 5:30pm and everyone was hot and thirsty. The soldiers marched past, swinging just their left arms as their right arms kept their rifles bolt upright. We followed them to the paddock where our car was parked and drove home.

This was not a friendly festival, like the Reed Dance (umhlanga). I felt an undercurrent of hostility from some of the traditionally-dressed men. But it was good to have seen a whole year of cultural events. 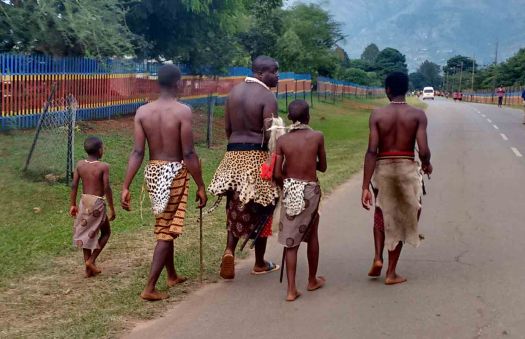