This is my sofa. It is a very comfortable sofa, on my verandah. I share it with a colony of ants and a family of skinks (a pretty kind of lizard with iridescent skin). I am not sure why the sofa is white, because it always looks grubby, but it certainly shows the ants. The skinks are more elusive. They hide away under the cushions. I hope I am not crushing them when I collapse in a heap on the sofa at the end of a hard day at the clinic. I don’t know if the skinks eat ants, but I suspect that they both live in harmony with each other.

The ants are a pest. They tickle my toes when they forage for food on my feet. I don’t think that my feet are that cheesy, but perhaps the ants have a better sense of smell than I do. Ant bites sting – probably caused by formic acid – and itch at the same time. I have to be scrupulous about cleaning up food and crumbs after preparing food, or I will be invaded. The worst thing is if I forget to rinse out my toothbrush, before putting it in my mouth. I When I can’t tolerate them anymore, I zap them with a spray called “Doom” with mixed results. I wish. My colleague in Swaziland, Marguerite, used to employ a paste of boric acid and sugar to keep down the ant population in her room. I will have to get the precise recipe as “Doom” should be renamed “Stay in bed for a few days until you feel better”.

Geckos are definitely my friends. They look as though they are made of soft, sticky, rubbery plastic. They hang out beside lights, waiting for flying insects to come close enough to be pounced upon and devoured. Occasionally, I will see a gecko tail which has been shed following an encounter with a predator. The tail threshes about for several minutes, keeping the attacker’s attention while the geck escapes. There is a move to spray the interior of homes with insecticide in order to combat malaria. I wonder what will happen to geckos if this goes ahead?

During the first week in Kapani Ruins, I shared my home with a frog. Perhaps the frog was keeping down the mosquito count as well, but I never saw him dart his tongue out at a passing fly. I usually saw him pressed up against the mosquito netting, gazing at the outside world. I felt he deserved a break, so I captured him and released him outside. Within a few days, he was back. Well, I think it was the same frog. He kept the same habits. He quite likes it when I have a shower because there is no curtain and the floor gets soaked.

I saw a stick insect in the shower, too. Just a small one. He looked rather pathetic and marasmic, so I took him outside, too. The praying mantis on the scouring pad was much more active, clawing at the air and looking around with his huge, compound eyes. I dealt with him the same way. Neither of these two have returned, at the time of writing.

Masonry wasps look alarming, with their skinny waist, fat abdomen and black thorax. They buzz around my head, getting tangled in my hair, looking for a nook or cranny to vomit up some material to build a home. Back in UK, Aldi was selling off some fly swatters which look like a squash racquet. You activate an electric charge by pressing a button, and if the wasp touches the wires and completes the circuit, it gets a jolt of current. This works reasonably well with mosquitoes, but it doesn’t do much to mega masonry wasps. They spark and smoke a bit, but keep on flying, albeit like the “Memphis Belle” returning from a bombing raid over Germany. They don’t sting, but they might start to do so if I continue to zap them.

The previous doctor warned me that they had a scorpion in the house at one point. Luckily I haven’t seen claw or tail of him since I have been resident, but I still tap out my shoes every morning. Occasionally a huntsman spider falls out, half dazed from a mixture of trauma and the overpowering odour of my smelly feet. They look large and alarming, but also do a good job of keeping down the resident insect population.

Baboons are my constant neighbours. They sleep in a tree next door and as soon as it becomes light, they are off foraging for food along the river. Instead of trooping off along the ground, they often decide to take a short cut by jumping onto my house’s corrugated iron roof. This makes a hell of a racket at 5:30am. They squabble and fight, screeching and squealing. They defaecate everywhere. If I am up early, eating breakfast outside, I can occasionally see them tiptoe carefully over the clear plastic part of the verandah roof. Their bony fingers grip onto the edge of the roof and they peer over the rim, head upside down, inspecting what I am doing. I can see them weighing up whether it is worth the risk of trying to steal anything which just might be edible. I don’t think they like Weetabix. “Baboon appetit,” and off they go. 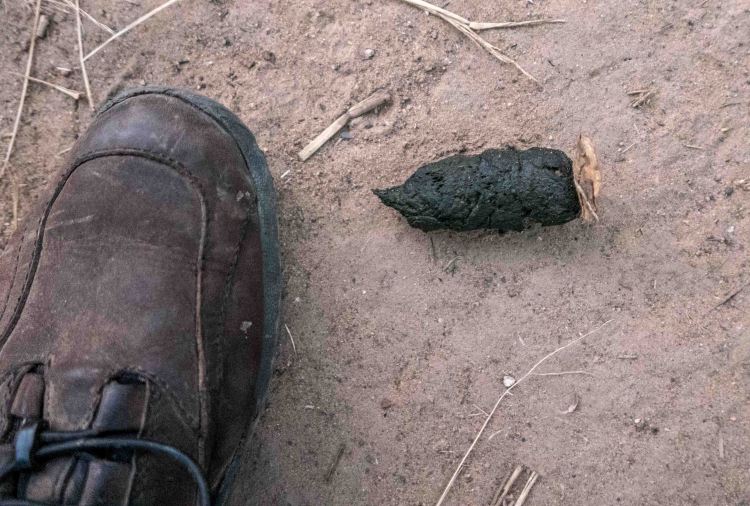 I get visits from little vervet monkeys, too. Sometimes they jump onto the outside tap and from there, up onto a small tree at the side of the house. This sapling oozes sap from multiple small wounds, which the vervets have probably picked at to prevent healing. They lick the sugary sap and poke their fingers into holes to get something tasty. It is amusing to see one monkey hard at work excavating some juicy bugs from a hole, when another leaps from my roof onto the first one’s head. The second monkey then stands on the first monkey’s shoulders, licking sap. First monkey doesn’t seem to mind at all. Perhaps it is a case of,  “He ain’t heavy, he’s my brother.”

Last week, I heard the distinctive cry “Joop, Jooooup” of a spotted hyena, checking out compound, looking to scavenge for food. I didn’t see it, though.

Next door, there are a pair of wildcats, who have been brought up as kittens, rescued from a bushfire in October. They are truly wild cats, as in the Scottish wild cat. Superficially, they look like a normal cat but have beautiful subtle markings and perhaps darker, more pointed ears. Their legs are longer. At six months of age, they are thin and rangy. The naughtier of the pair is called Harry. He stalks butterflies and pounces on them with four legs extended, claws unsheathed. Wildcats enjoy poaching chickens at night, which annoys the locals so much that they kill the cats. Harry has been neutered to reduce his hunting nature, and he is kept indoors after dark. He may have lost his balls but it has probably saved his life. 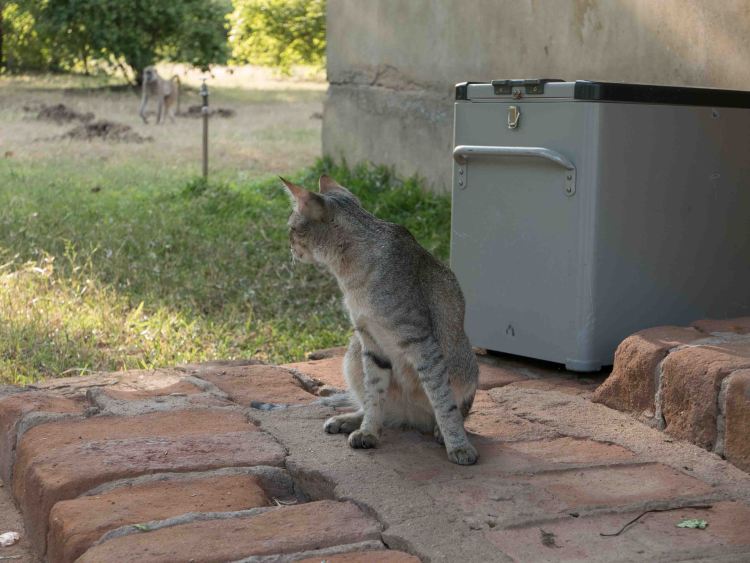 There are some domestic cats, round and about, but they often fall prey to the resident leopard, who seems to thrive on pets. I have seen the leopard once while doing a home visit at night and the car’s headlights picked out this wonderful beast crossing the track, a few metres ahead. The leopard has already taken a piglet from the sty attached to a Zambian’s house about 100 metres south of my home.

Yesterday morning, I was eating breakfast outside, when a male impala bounded through the houses. I wondered if it had been escaping from a leopard’s attack. My next door neighbour told me that some years ago, just after sunset, a buffalo came roaring at full pelt across the patio and upset the barbecue. It was closely pursued by a lion. My neighbour and his partner had been sitting there, just ten minutes previously. The lion caught and brought down the squealing buffalo a few metres away from the house, but an angry elephant chased the predator away.

The buffalo died of its wounds the following day. But the Weber barbecue lived to braai another day, albeit dented and tilted at a slight angle.

Elephants have been through the area recently, too. They walk through at night, when they are less likely to come into contact with humans. They are very noisy, ripping off branches and stripping leaves. They have been known to push down houses in the locality, presumably looking for food. They produce a huge amount of dung which is spread liberally along their path. I am no expert, but I can give a reasonable guess as to how long ago the dung was deposited, according its appearance. The photograph shows dried dung about a week old. A colleague living in a house a few hundred metres along the riverbank from me told me that she had been kept awake by an elephant which was “heavy breathing” outside her bedroom window. 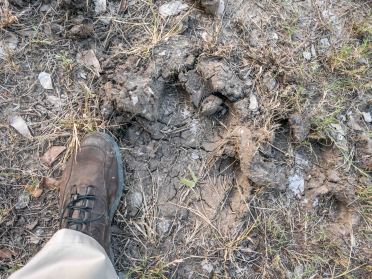 Hippos make a lot of noise, too. I can’t hear them during the day, but if I walk five minutes down to the riverbank, their basso profundo grunts break the silence every few minutes. In the photograph you can see the tracks of the hippos across the mud and into the stream which leads up to our houses. I have once seen one lumbering up a steep, muddy gulley to get up onto the bank. It is incredible how they can move their huge bulk up a slippery  30 degree inclined path.

Hippos often rumble along between my house and my next door neighbour’s, munching on greenery as they go. It sounds like a repeated “chomp and slap”. At first I thought it was someone limping around outside my bedroom with a stick. It was just hippos grazing. I always take a torch with me if I venture outside, because I don’t want to have an unexpected meeting with an angry hippo. Everyone tells me that they “kill more humans than…(add the appropriate dangerous animals: sharks, lions, elephants, etc)”.

Douglas, the hippo raised from infancy at Chipembele, is now a huge, lumbering beast. Well, he was a huge, lumbering beast at just a few months old, when I first saw him in 2014. He has grown and his protectors have been trying to get him reduce his contact with humans and to make new friends in the river. I hope he will be able to join a pod.

One evening earlier this week, I was on my verandah, typing away on my laptop as the sun set, when a pair of ground squirrels came to investigate. They are smaller and thinner than our red or grey squirrels. They have a thinner, bushy tail; it is slender and about as long as their bodies. When foraging, they hold their tail vertical, just like a warthog when it senses danger. They made delicate leaps around the ground below the verandah, tails erected like aerials behind them. I wonder if previous doctors have fed them in the past and they are looking for titbits. Oddly enough, they don’t live in trees. Perhaps the name “ground” squirrels gives this away.

Finally, last night, I was watching Game of Thrones, series 2 on my laptop at home when a bat started circling the electric light at high speed. The roof doesn’t have a ceiling to avoid creating a space for bats to roost and defaecate. He got in, I suppose he will find a way out. I opened the door for five minutes but that just let in a cloud of mosquitoes. I will let you know if he returns to watch the next DVD.