I hope you don’t think that this is cheating, but my 5km is a mini-biatholon of walking and swimming. Each morning, I walk from my apartment along Gyan Shakti Mandir Marg in Shalimar Bagh to the Municipal Corporation of Delhi Swimming Pool. I set off at 6:40am and reach the pool after fifteen minutes brisk walking. Eighty laps (2km) takes me about three quarters of an hour. I then walk home for breakfast. Combining walking and swimming gets me to 5km.

Gyan Shakti is a straight dual carriageway, with a narrow central reservation planted with bushes. The inside lane of both roads is blocked by cars, usually parked at an oblique angle, to fit more vehicles in, as garages are rare and car ownership is rising drastically in the city. There is a pavement on the right side, which covers an open sewer, but the blocks are broken, making it treacherous to walk. It is also the preferred al fresco toilet of numerous street kids and people living rough. The earlier I leave home, the more likely I am to come across someone squatting and shitting. I am more embarrassed than they are; they don’t bat an eyelid. 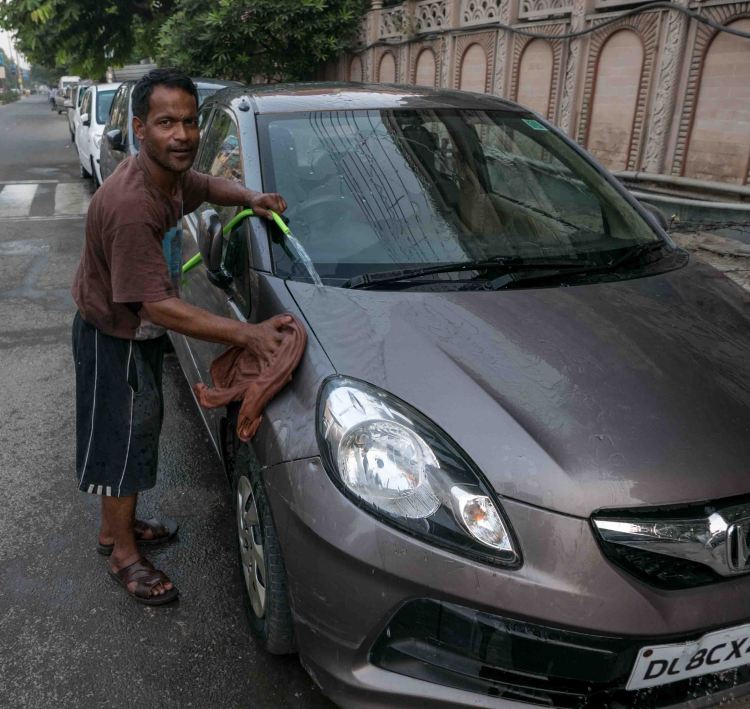 If you are wealthy enough to own a car, you probably have a chauffeur. His job is to clean the car each morning, sometimes with a dirty rag slopped from a filthy bucket and other times with a hose and chamois leather. All but the newest cars here have dents and scrapes because of crazy driving, traffic congestion, lack of adherence to motoring rules and competitive queue jumping.

Moving along the jagged edge of the parked cars, I am more likely to step in cow dung. The street has a resident herd of about twenty cows. The locals feed the cows leftovers from last night’s supper. Cows used to approach me in anticipation, but all I have in my shoulder bag is a towel, goggles and swimsuit. Occasionally cars will stop in the fast lane in order to feed the beasts. I have even seen scooters driving past with their pillion passengers flipping “chapatti frisbees” at cows. 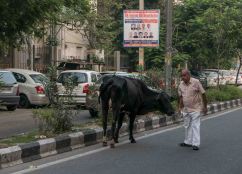 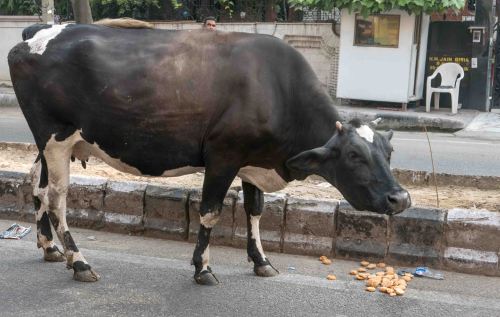 Students are getting ready to travel to private schools all over the district. There are large buses, packed with children, even sitting alongside the driver at the front. Some parents will club together and hire a mini-van which is invariably jammed full of kids. If the journey isn’t far, the children will go by cycle rickshaw, three in the seat facing forward, and a couple on the back, facing to the rear. Occasionally children will get a lift on their dad’s motorbike or scooter, sitting astride the tank or standing in the footwell. The law regarding the wearing of helmets is widely ignored. 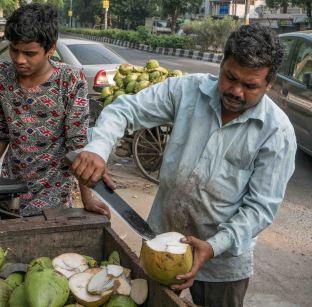 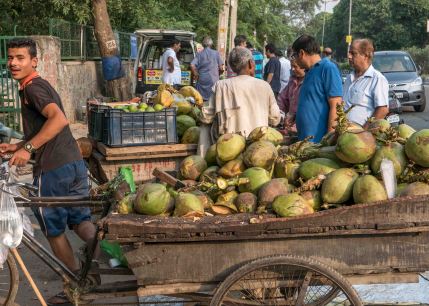 Where Club Road branches off, there is a park called Ram Bagh, one of the hundreds of small patches of greenery which make up the lungs of the city. And Delhi really needs them. It has the worst air pollution of any city in the world outside China. The air quality today was poor, 174 on a scale of 0-500. Google tells me that the “main pollutant was PM 2.5” whatever that means, and I should reduce intense outdoor activities. The sky is dull and grey, with limited visibility, but not quite a “pea-souper” yet.

At the park gates there is a crowd of middle-aged to elderly Indian men, who have just done a constitutional walk to try and ward off diabetes or to unclog their coronary arteries. They are drinking fresh coconut water directly from the nut. Few of them use a straw, but most have that “well-practised pour” which gets liquid from receptacle to mouth without their lips touching it. One or two will look through the smog at a pale disc of sun and say a prayer, while sloshing coconut water in its general direction.

Some of the men dye their hair gingery red. I am told that they do it to disguise the fact that they are going grey. To my mind, this just draws attention to the process, especially when the silvery roots start shining through. I thought it was henna, but using the natural dye is so complicated (going to sleep with a hair net to keep the dye moist, for example), that most men use a synthetic dye for convenience. 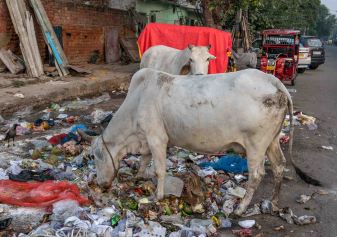 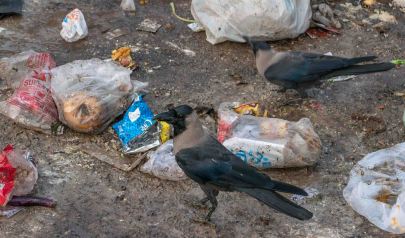 Further on down the road, there is an open rubbish tip where everyone dumps their trash in a huge pile. There are usually a few cows poking about for a choice morsel, some dogs, rats and the odd crow. See my previous blog “Apocalypse Cow” for more details. It stinks to high heaven, so I prefer to stay on the right side of the road at this juncture. I have seen mini garbage trucks with a lift on the back, but usually there is a sweeper who scrapes the muck together and shovels it into a pickup tricycle. Sensibly, he tucks his trousers into his socks while he’s working. 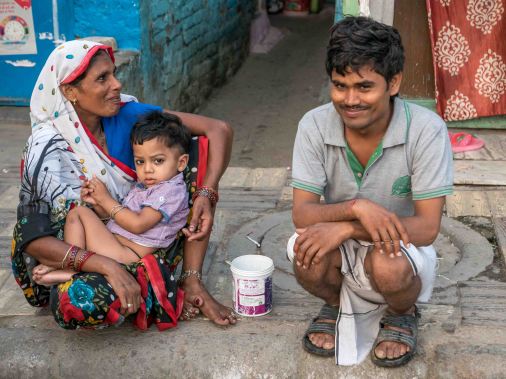 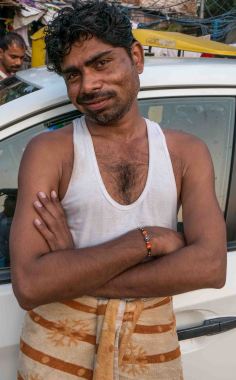 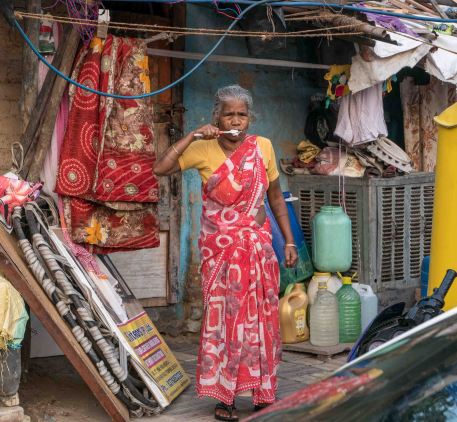 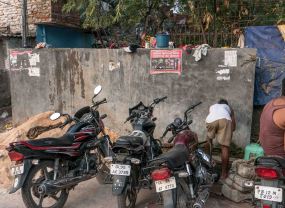 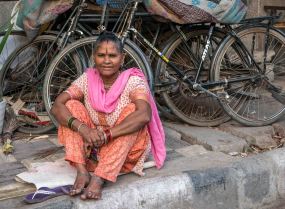 There is a row of one room houses beside the garbage and a communal washing area, behind a high concrete wall. I can see hair being shampooed and lungis draped over the wall after being soaped. I think that the men and women take turns. As I am the only white man in Shalimar Bagh, I get quite a bit of attention on this part of the street. Young men ask me for selfies, dusty boys ask me for sweets and ladies chewing paan chat happily away in Hindi to me for a few sentences before spitting a thin squirt of red juice into the road.

One grandpa with a white handlebar moustache sits on the roadside with his grand-daughter on his knee, while he massages her feet. A grannie brushes her teeth. A rickshaw wallah lounges on the passenger seat trying to make eye contact with me, even though he knows I am  just another 100 metres away from the pool.

I used to go for the 6am swimming session, but it was too busy. I prefer the 7am slot as it is less packed and I can sneak in five minutes early and knock off the first ten lengths before the regulars arrive. The early crowd are middle-aged men, most of whom think that by chatting with each other while hanging on the edge of the pool will reduce the size of their bellies. They all know I am a doctor, so I get asked about skin problems, how to lose weight, whether ayurvedic medicine helps their blood pressure and diabetes, and inevitably, about their waning sexual prowess. Pointing at their protuberant abdomens, I ask them when their baby is due. All good natured banter. 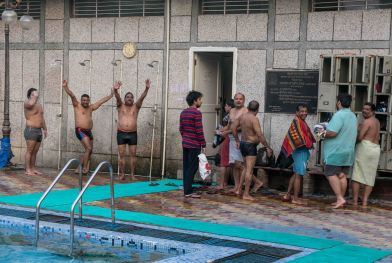 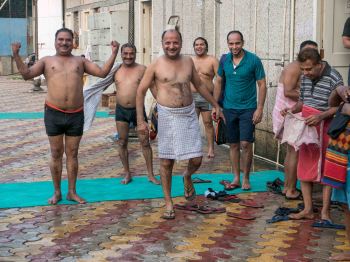 On the attendance register I notice the name “Dr Sen”. Naturally I assume he’s a medic, but it was a PhD and he’s an economics professor. He offers to bring me some of his academic papers to read. Another chap asks me how to lose weight and it transpires he is drinking a litre of whisky a day. A couple of youngsters ask me where I was from and what was my name. They give their names and say, “Right, we’re friends now. Do you want to come back for breakfast?”

Perhaps because of the high density of population in Delhi, the locals don’t have the same sense of personal space that we have in England. Pushing and shoving in queues at the Metro is normal. Brits tend to go out of their way to avoid touching, but in Delhi, it is inevitable. In the pool, I will be carving out some lengths front crawl, when someone will jump into the water front of me. They can see I am swimming lengths at a reasonable speed, yet they will push off from the side to swim a width on a collision course. Groups of young men congregate around the ladder at one side of the deep end just where I make my turn. In the shallow end, they sometimes just stand directly in front of me, forcing me to take avoiding action. It may be that they want an excuse to strike up a conversation or practise their English, but I honestly think that they don’t realise what they are doing infringes my exaggerated sense of pool etiquette. 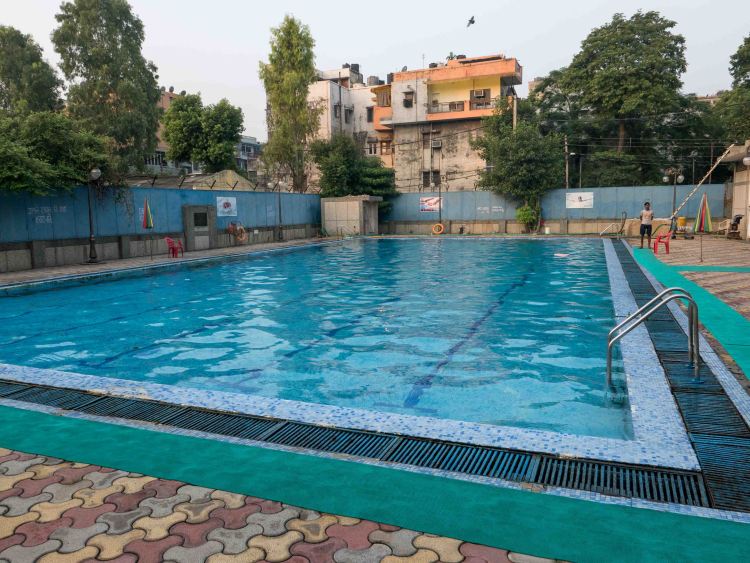 The pool isn’t highly chlorinated, so the local birds sneak down to have a drink. Once I was shocked when I swam past one of the poolside ladders and saw a crow perched there, watching me intently with a beady eye.

But after about ten minutes splashing about, the lads cling onto the rail of the pool and chat with each other until the session closes. That gives me the space to complete my 2km in peace, but I still have to keep a look-out for stray swimmers.

The water in the pool is about 30C, so it is almost too warm for strenuous swimming. I sweat when I get out and need to cool down with a shower. To my intense disappointment, the Municipal Corporation of Delhi will close the pool for the winter next month, “because it will be too cold”. The pool manager will go back to his village in Haryana and grow wheat. I will have to wait until March before the pool reopens, and I can pay my Rs 1000 per month subscription (£11). 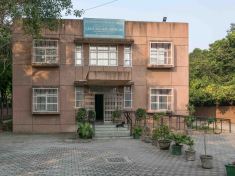 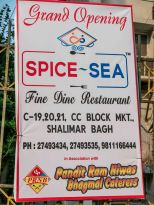 Walking home, I pass the Maharishi Ayurveda Hospital, managed by a medical institute and research society (first introductory Yoga session free of charge) and the CGHS Wellness Centre, complete with dog on the steps. Then there’s a street restaurant, with cooks preparing aloo gobi (cauliflower and potato curry) and atta flour to make bread – rotis and chapattis. This is totally different from the fine dining advertised in the poster above – the grand opening of “Spice Sea” (geddit?). 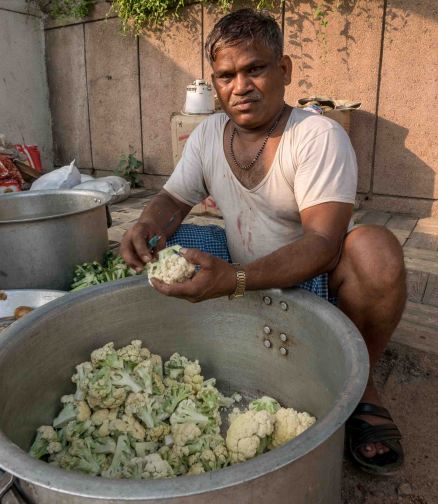 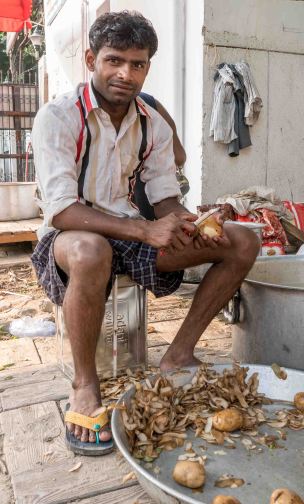 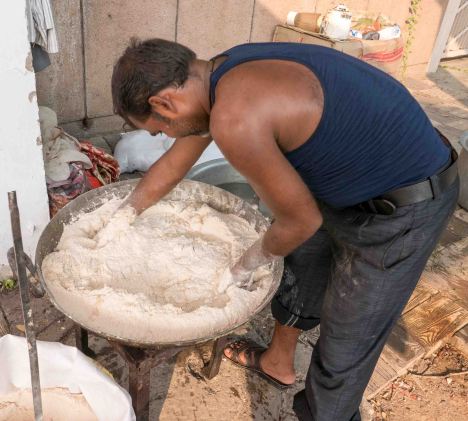 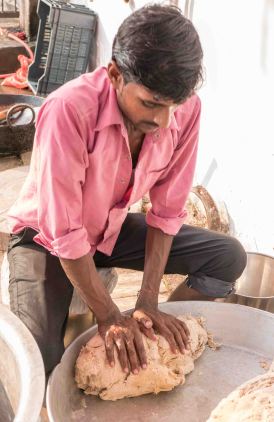 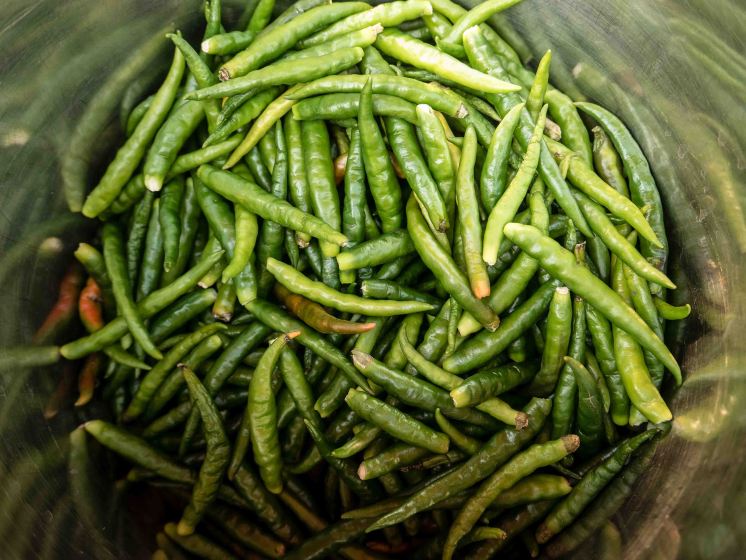 Further down the street there is a Sikh Gurdwara, which always seems welcoming with its sing song chanting of the scriptures to the beat of a tabla drum. I am very wary of traffic in this area as I was nearly knocked down by a car driver who had taken his hands off the steering wheel and pressed them together in prayer by his forehead as he approached the temple. 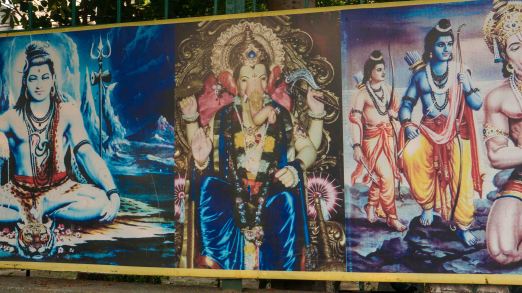 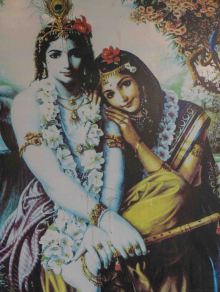 Among the advertising hoardings, there are faded posters of Hindu Gods, Shiva, Ganesh, Krishna and Radha. There’s a queue for fresh milk in plastic bags at the Kanha Dairy. A chai wallah is selling tea, made from boiling together milk, water, sugar, cardamom, sugar and tea leaves. And sugar. Next is a South Indian restaurant with orange sambar sauce and white idli patties being prepared for breakfast. But not for me. I still have some Weetabix that I brought with me from UK, which I’ll have with a nice cup of Tetley’s tea. Unsweetened, of course. 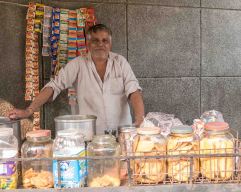 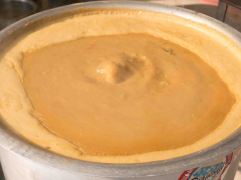 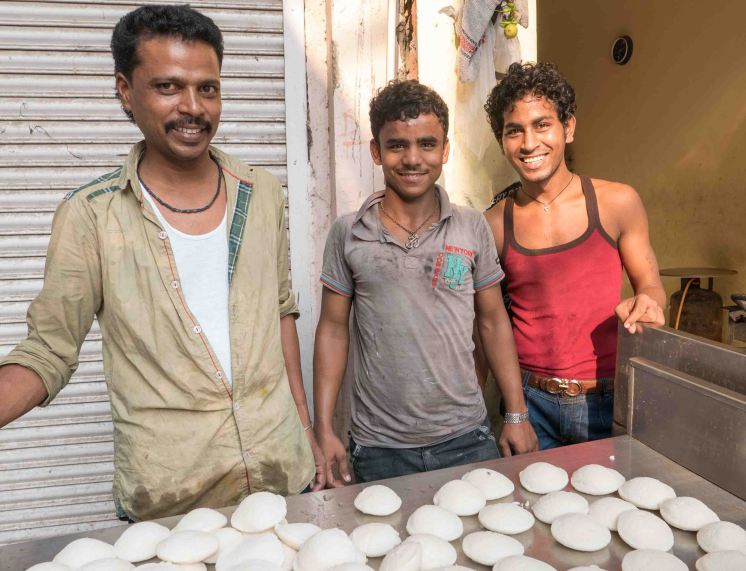