Adrenaline isn’t really my thing. I don’t mean the intracardiac injection of the stuff to restart a heart; I mean the excitement of a fairground. I realise I am in a minority here, not enjoying having my nerves frayed by riding on a roller coaster or a kamikazi pendulum. I’d rather have a cup of tea, personally. But we were being treated to some showground fun by a lovely Indian lady and her seven year old son, so I had to show willing. After the funfair, we had front row seats to see the Ramayana epic. 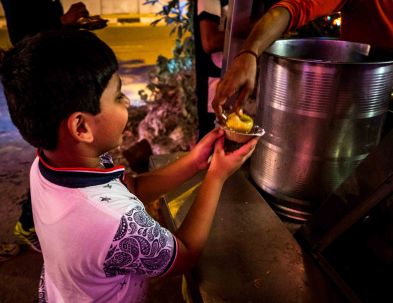 But before the entertainment, we had to eat some traditional Delhi fast food. We started off with golgappas. These are small crispy hollow spheres, about the size of a ping pong ball, which have been deep fried then left to cool. A chef pokes his thumb in to make an opening, spoons in some potato curry and then fills it up with cool, spicy, salty, sweetish liquid. You buy a half dozen and eat them whole. The sensation is amazing when you chomp down on the golgappa and the liquid squirts out inside your mouth, followed by the texture of the potato curry and the crispness of the shell.

Next up was a yoghurt dish called Dahi Bhalla. Foodviva.com gives the recipe as this:

Take 4-5 fried and soaked vadas in a deep serving plate or a bowl. Pour generous amount of curd evenly over it until fully covered. Top it with 2-teaspoons sweet chutney and sprinkle red chilli powder, roasted cumin powder and black pepper powder. Garnish with coriander leaves and pomegranate seeds.

I really enjoyed my portion, something I would later come to regret when we went on the Ferris Wheel.

After the eating, we crossed the ring road and entered the fairground for the playing. The first ride was a runaway train. The lead carriage was painted like a dragon. There were no seat belts or gates on the coaches. Blue sparks were spraying from the wheels as the train got up to speed. It was about two metres off the ground, so anyone being flung out would have a nasty fall. I sat next to the little boy on the outside, so I could absorb the G force and keep him in his seat. He hooted with pleasure and insisted we go on the Ferris Wheel.

I said that I didn’t want to vomit, but his mother informed me that would only happen if I was being spun around. Just going up and down should be ok. I reluctantly agreed with her logic. The Ferris Wheel was propelled by a diesel engine with a long drive belt. The carousels had open doors, no gates and again, no seat belts. This was not the London Eye. But it wasn’t very reassuring that the ambulance was parked just beside the wheel. 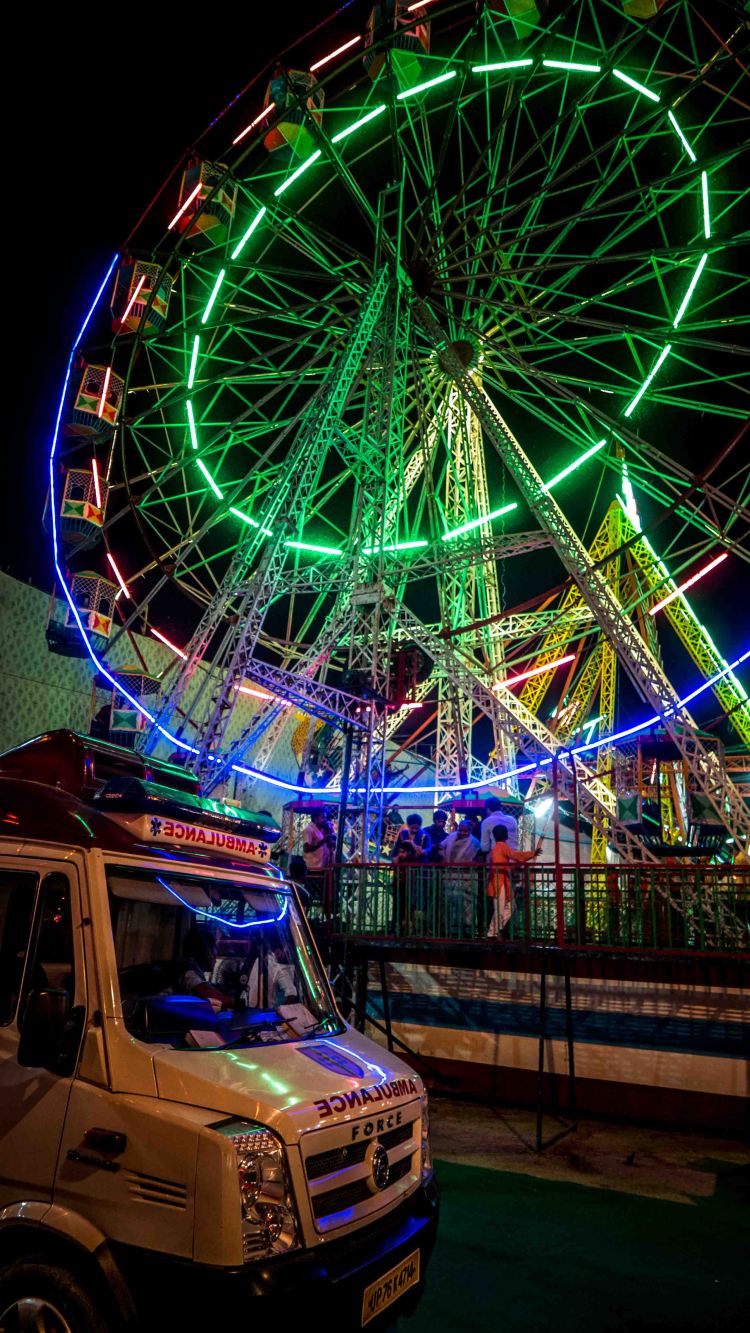 We took our seats in a carousel and waited until all the others were filled up with paying customers. The wheel started turning faster and more jerkily, to make the carousels swing like a pendulum. At one point I thought the carousel was going to loop-the-loop. I stopped taking photographs and hung on for grim death. This was a white knuckle ride. Even the little boy was scared, so we had to lie through our teeth and tell him that this was fun, and not to be afraid. We would be getting off soon, hopefully in a controlled, gentle manner. 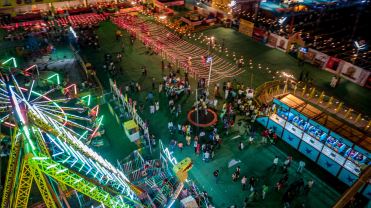 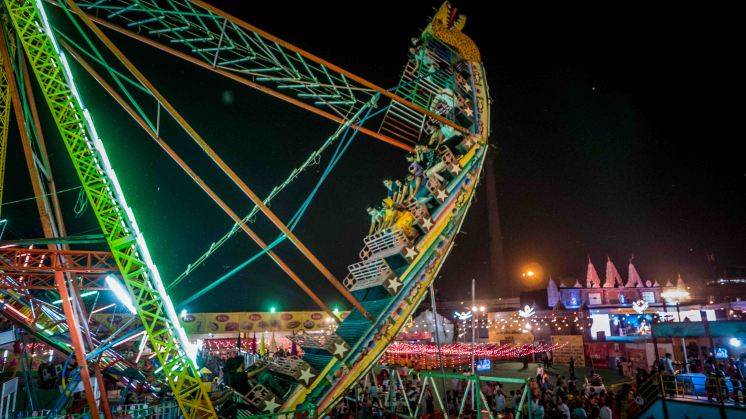 My nerves were shot, but he wanted a go on the viking ship which swings like a pendulum. My colleague took him on board. The photographs are telling. From the bravado of waving their hands in the air at the start, I have some blurry shots of them clinging on to each other and the seat in front. Not a lot of safety features on this ride, either.

The adults needed a rest, so the little lad burned up some of his endless supply of energy on a bouncy slide. Then we went into the main viewing area for the Ramayana.

The stage was extremely wide, with VIP areas at each end. In front, below the main stage there were men operating cameras, lights, computer screens, and the video screen backdrop of forest, castle interior or the sea between India and Sri Lanka (the Palk Strait). Above there was a canvas mock up of a Hindu temple with its towering shikharas.

The sound system was eardrum rupturingly loud. We got prime seats in the front row of the audience, sitting on white sofas, close to a stack of loudspeakers. A helpful chap rearranged a fan so we were kept cool. But this resulted in us being bombarded by thousands of pale flies which had been attracted by the lights, then blown our way. Remind me never to wear white at night in these conditions again.

The show was like a pantomime, with a few songs (everyone seemed to know the lyrics) and not a lot of acting. Lord Rama’s role seemed to be to look beautiful and serene, carrying a bow and arrow and strolling on and off stage, with his brother Lakshman. Hanuman, the Monkey God, was very impressive. He carried a massive golden club. There were a dozen lads dressed in monkey outfits, with tails and makeup to match, who were his soldiers.

All pantomimes need a villain, and Ravanna / Rakshasa, the demon King of Lanka filled that role. He has ten heads, which spread out alarmingly past his shoulders. He kidnapped Sita, Rama’s bride and carried her off to his fortress in Lanka. As he walked bombastically across the stage, the sound system played deep, manic, melodramatic laughter. 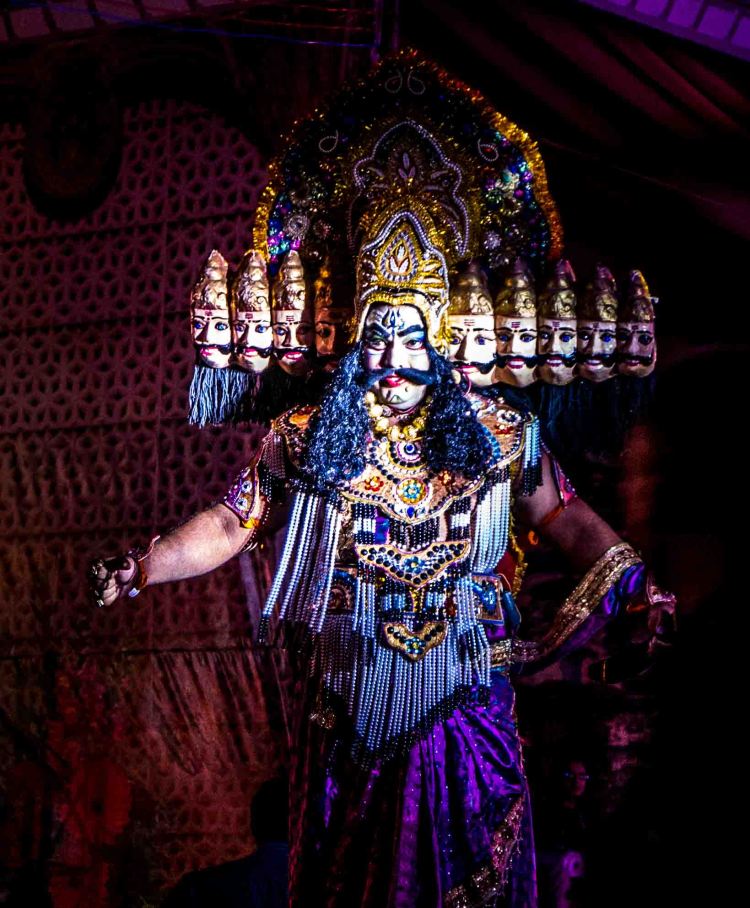 After two hours, Rama and his army had only just managed to cross the sea. He fired off an arrow which landed quite near me and someone gave it to me as a memento. It was just bamboo wrapped in silver paper, but it was eagerly sought after by children in the adjacent seats.

Suddenly, the lights came up and a crowd of politicians and local MPs mounted the stage. There were some songs, some speeches, lots of garlanding and back slapping. My host translated what was being said, which went along the lines of “We must support our brave troops defending our borders. Just as Rama is attacking Lanka, our jawans are making surgical strikes to knock out terrorist camps which are tolerated/supported by Pakistan in the disputed area of Kashmir.”

I wondered how much of this sabre rattling talk was because it resonated with the mythical military exploits of Rama and how much it was to detract attention from slow progress in the government’s programme of reform.

Then after the party political broadcast, the play resumed for another hour or so. The initial battle between Ravanna’s and Hanuman’s troops lasted longer than the opening sequence of “Saving Private Ryan”. Then, <<spoiler alert>> Lakshman collapsed with a trident in his abdomen.

By this time it was half past midnight. My host said, “He will be in a coma for at least another hour.” I took the hint and said that I’d seen enough. The little lad was still full of beans and insisted on another ride on the runaway train, followed by a further helping of golgappas while we waited for my lift to arrive.

My host wanted to give me a souvenir gift for my daughters, an enormous blue teddy bear. “All girls like teddy bears, whatever age they might be,” she said. “But my eldest is 31 next week,” I replied. “Give this to her for a birthday present. It is light, it won’t affect your luggage allowance.” I told her that it might be light, but it wouldn’t fit into my suitcase, and politely declined. I thanked her profusely and said goodbye.

Our next evening adventure is on 11th October for Dussehra. This is when the Goddess Durga leaves the idols, and they are immersed in water before returning to the temple. It is also the grand finale of the Ramayana when the evil Ravanna is blown up with fireworks. I can’t wait.