“The last flicker in the dying lamp of Mughal architecture in Delhi.” Anon.

This beautiful red sandstone mausoleum stands in the centre of formal gardens (“charbagh”) surrounded by a fortified wall. It is situated just to the south of Lutyens’ New Delhi, a few kilometres to the west of the other great Mughal mausoleum, Humayun’s Tomb.

It is a masterpiece of design, built by Nawab Shuja-ud-Daula for his father, Mirza Muqim Abul Mansur Khan (everyone called him Safdarjang for short), in 1754. You might think that he must have been a powerful man to warrant such a monument and you would be correct. From being Governor of Awadh (Britons know this province as “Oudh”), he became a successful Grand Vizier to the Emperor, Muhammad Shah. After the Emperor died, his successor Ahmad Shah Bahadur was more interested in wine, women and opium, leaving  Safdarjang to wield the power. He became too big for his boots and the royal family arranged for the Marathas to get rid of him. He only came back to Delhi to be buried. 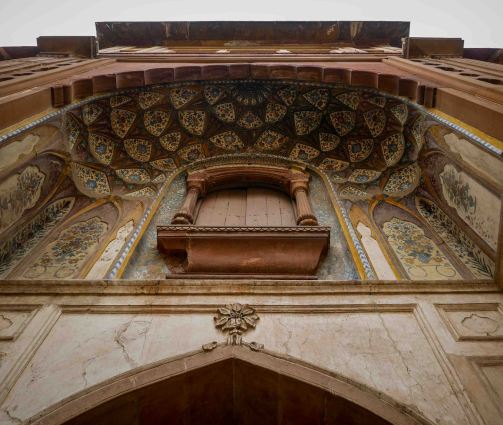 The area is defended by a massive gateway with some impressive nail-and-spike-studded doors. Above is an elaborate, scalloped roof in red, green, blue and cream. As you walk through the gatehouse, past the ticket collector, you get a framed view of the mausoleum. It stands at the end of a canal (unfortunately now dry), flanked by a row of tall palms. It rises from a plinth composed of recessed arches, leading to cells behind ancient locked doors. It reminded me of those dodgy lockups you find in London built into the arches of railway bridges where villains keep victims. 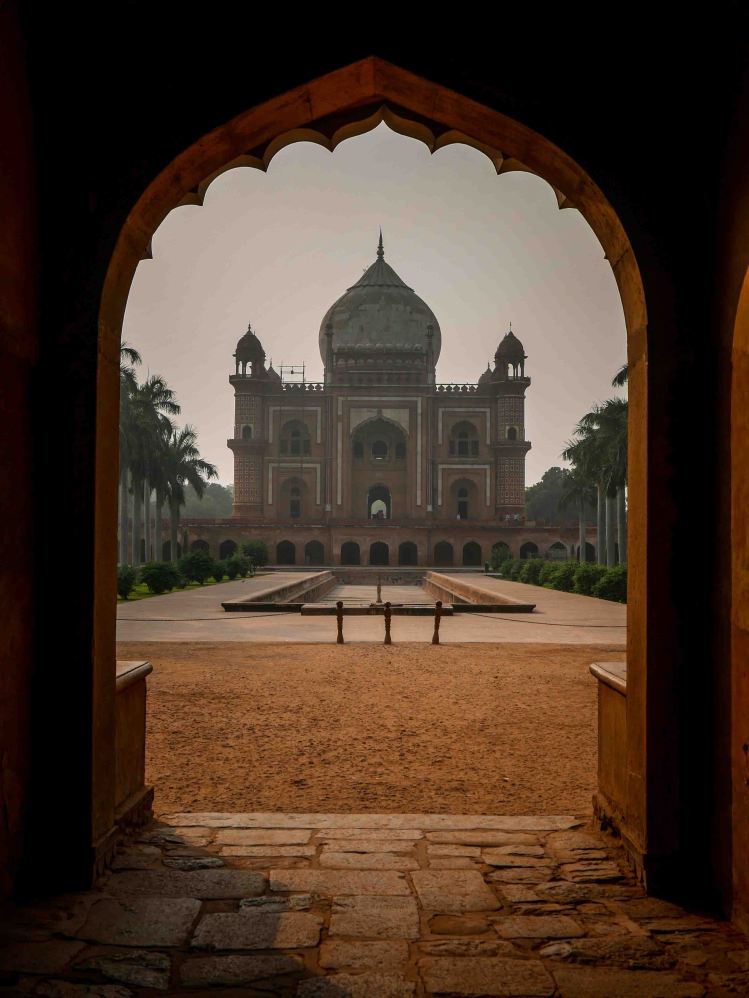 At each corner there is an octagonal chamber with a veranda. There are flights of steep stone steps up through the plinth onto the upper level. The mausoleum towers above, with two storeys. Minarets guard each corner topped by chhatris and connected by faux battlements. The onion-shaped dome is topped by a finial, covered by a wonky lightning conductor. 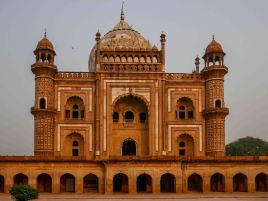 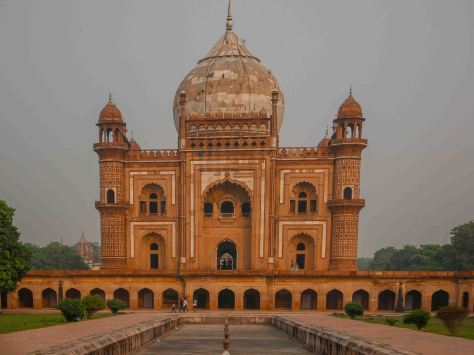 In the centre of the mausoleum, there is a marble cenotaph, beneath which there are two tombs, presumably one for Safdarjang and the other for his wife, which are inaccessible to tourists. The surrounding anterooms are in a state of disrepair with several walls defaced by modern graffiti of the “Kevin loves Sharon” variety. The vaulted ceilings are exquisitely and wonderfully carved. The domed ceiling is like the petals of a flower, with a pistil of a chain and hook, presumably from which to hang lanterns. 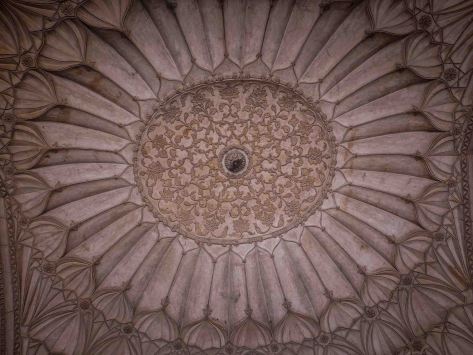 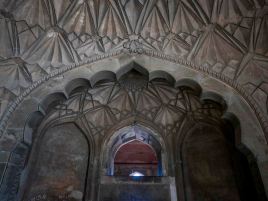 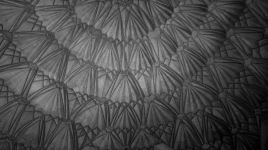 The floors are stone and marble, with some simple inlay resembling that of the Taj Mahal. There are some white marble pillars with carved decoration, smoothed by grubby fingers over the centuries. Outside, there are marble facings, setting off the crumbling, red sandstone. There may be a reason for this. I discovered that the stone and marble is actually second-hand; it was stripped from another tomb (that of Abdul Rahim Khan-i-Khanan) nearby. 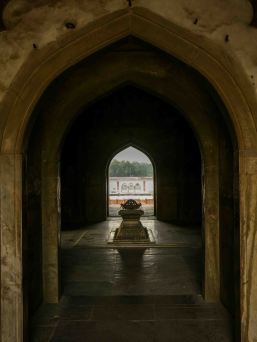 There are three white palaces built into the surrounding crenulated wall. The Moti Mahal (Pearl Palace), Badshah-Pasand (King’s choice), and the Jangli Mahal (Sylvan Palace), occupy the north, south and west walls. The Moti Mahal has been converted into offices for the Archaeological Survey of India. The gatehouse and the mosque are situated in the eastern wall. 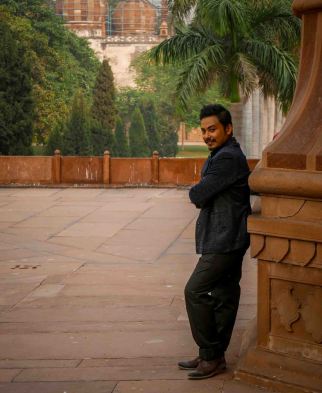 Enough of the formal guidebook-style blog tour. What did I see and do? I chatted to a team of student cinematographers who were shooting footage of a famous Manipur film star. I sneaked off a couple of photographs myself and helped to keep a bothersome German lady from getting in shot. I could see that the film star was experienced at being photographed. He was patient, threw some interesting poses, some of which were rejected, others were accepted and developed. He knew how to look at the camera and it seemed to like him. A lady came onto the scene who was dressed in black with an elaborate hairstyle. I thought at one point that they were going to kiss – but this is India, and lip-wrestling on film is banned. She just caressed his cheek with her hand.

The tomb formed a beautiful backdrop to several other photographers,  each with some smartly dressed female models. I was seriously impressed with the ability of one young lady to walk in these red shoes with four inch metal stiletto heels. She agreed to let me photograph them. (I am not that creepy to sneak a photograph without asking.)

Scattered throughout the formal gardens there were amorous couples, canoodling or just chatting in secluded spots. Over by the walls, behind some bushes, in the arches of the plinth, or in an anteroom of the tomb. I just smiled and walked on, respecting their privacy. You may recall that I have already written a blog on couples at Humayun’s Tomb.

Experts regard Safdarjang’s Tomb as inferior, less elegant and incorrectly proportioned compared with the perfection of Humayun’s Tomb. I agree, it has its flaws, but that is what makes it so charming. I appreciate the crumbling, cracked sandstone, the worn designs of lotus flowers, the black stains on some of the walls, the wasp nests and pigeon droppings. I think it gives it more character and it is less sterile and correct than its counterpart to the east, down Lodi Road. 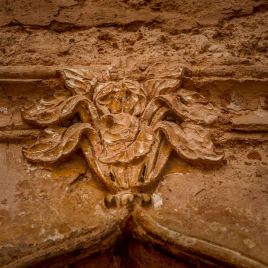 The red and beige sandstone has been eroded by the elements and one can see where some repair work has been done. What struck me was that instead of all the carving being symmetrical and identical designs, there are flashes of individualism. A carved tendril winding around a stem. A leaf which has been folded down. Irregularity makes it more tangible, I think. I like the idea of a stone carver who can add personal touches to his work, which are only noticed if one takes the time to scrutinise it. 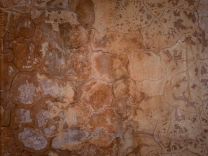 I particularly enjoyed the tiny cafeteria, snuggled into the south wall. Apart from sweet masala tea, there were cool drinks available from a Coca Cola branded refrigerator. The cook had a gas ring to rustle up an omelette if you were feeling hungry. 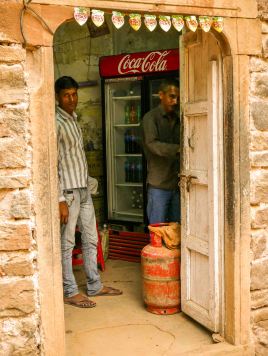 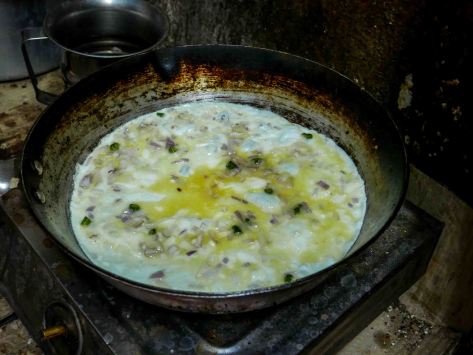 Employees and guards were cycling around the grounds, which gave me the excuse to take some quirky photographs. 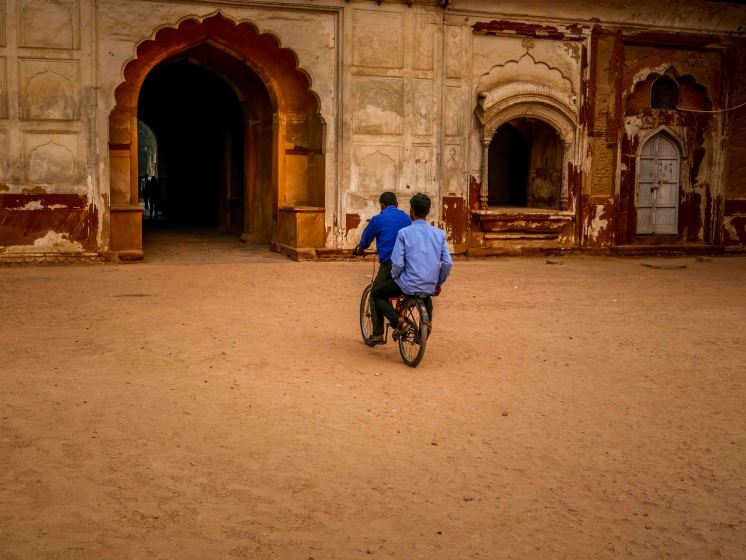 The hazy sunlight of late afternoon gave a golden hue to the red sandstone, which I thought was marvellous, but difficult to capture realistically. See what you think.