Indians like to give their gurus lots of titles. The Jain leader who is commemorated at the oldest known Jain site in Delhi is called Dada Gurudev Manidhari Shri Jinchandra Suriji Maharaj Saheb. He was a child prodigy, born in 1140AD, who went on to renounce the world when he was six years old. At age 14, he became head of the Jain religion. He died when he was just 26.

The story goes that before he died, he told his followers to carry the body directly to be cremated at a distant place, without stopping. He said that the place of his cremation would remain barren for 800 years. Of course, his disciples failed to follow his advice, and stopped for a break at Manik Chowk. They could not move the body again, even using elephants. So they had to cremate him on the spot.

The magic jewel inside his forehead burst out during the cremation and was caught by a devotee, who was also a Muslim fakir, in a bowl of milk. All that was left of the body when the fire went out was a pair of footprints and a yellow stone. 800 years later, a temple was built at the site.

Like Baldrick, I had a cunning plan. Instead of going directly to the Qutub Complex this morning, I decided to do a tour of archaeological sites in the Mehrauli area en route from the Metro station. Of course, like all of Baldrick’s plans, things went wrong because I spent too much time pottering about. By the time I got to Qutub, the queues for tickets were about 50 metres long and the place was packed. Mental note: next time, get there early and not on a public holiday.

Within a couple of hundred metres of the main road, I came across an ancient building. There were signs from the Archaeological Society of India, proclaiming dire penalties if I abused or defaced the site, but there was no name. I asked a sweeper, but he had his earphones in as he swept and pretended not to hear me. This usually happens if someone is embarrassed about not understanding English. They have an excuse not to respond. I didn’t want to shout louder, like a typical tourist overseas, so I carried on. 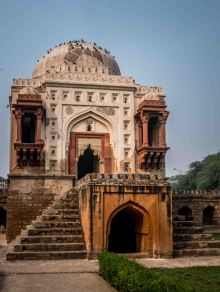 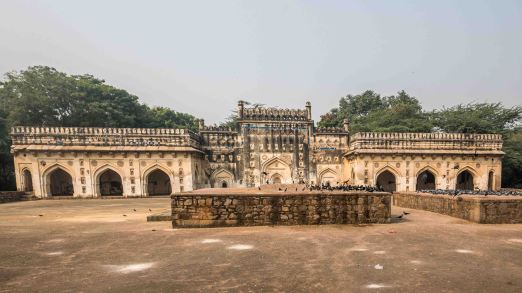 It looked like a tomb with an attached mosque to me, but Google Maps said it was a Jain temple. I saw someone inside the mausoleum and greeted him in English. He didn’t know the name of the building either, but he did enjoy watching birds. There were about a hundred pigeons and a dozen crows pecking away at some corn which had been laid out. On top of the mosque, there was a black kite, just surveying the scene, looking for stragglers. 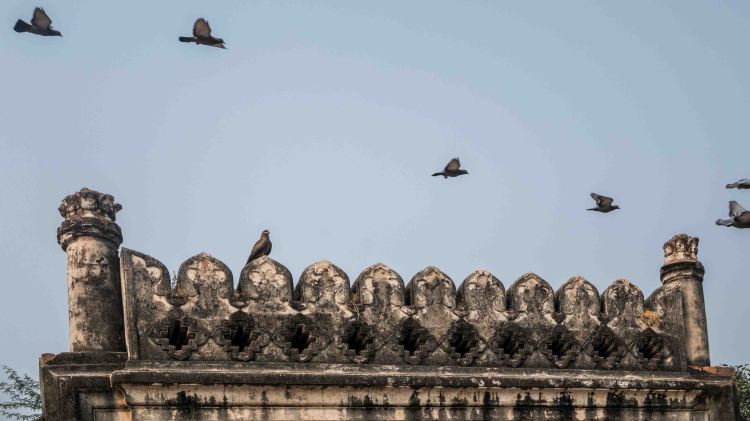 I walked along the road a bit further and found another mosque. This building was occupied, because there was a washing line strung up outside. I am not sure if the imam’s family lived here or whether the mosque had been abandoned. I didn’t investigate.

Finally I found the Jain Temple which Google had marked. Somehow on the map, it had now switched over to the north side of the road. I deposited my shoes and walked across a red carpet over the road and onto the cool white marble to explore. 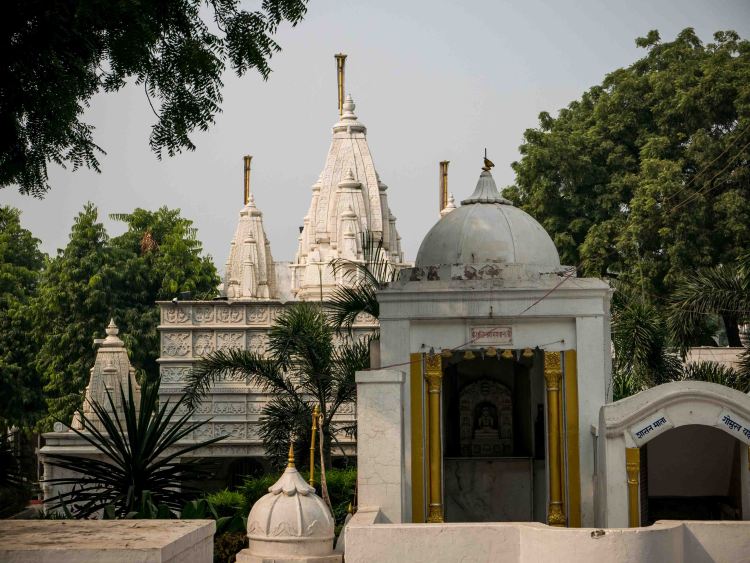 I discovered the story of Dada Gurudev written on a wall, so I had an idea what the theme of the temple was going to be. I was impressed by the reflecting coloured glass mosaic ceiling; I was less impressed with the broken electrical fitting of the overhead fan, which looked like it might break loose at any minute. But it was cool and the fans were not operating, so I felt safe.

All around the site there are small idols in white mini-chapels. Most of the idols are white marble, but one or two are black. Jain idols are tīrthaṅkaras or teaching gods. Jains worship twenty four tīrthaṅkaras. They all have a different facial expression, which I found fascinating. Most of them had a smile. too. These idol kiosks are spread randomly all over the temple. You walk along a winding path, through a tunnel, up some steps and every ten metres or so, there’s another idol. 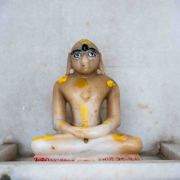 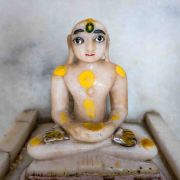 There were Jain monks, dressed in white togas, with a mask over their faces to prevent insects from flying into their mouths. I have seen monks with sweeping brushes which they use to clear away any insects from their path. They consider all life is sacred and won’t even eat cauliflower as there might be a tiny insect concealed within a floret.

Each idol had a cash box with a slot for donating cash and a padlock, to ensure the cash was not pilfered. There were bells, which visitors would ring to call the idol’s attention. Some kiosks were covered in gold leaves. Not gold leaf, but strings of gold-painted leaves, which looked rather attractive. 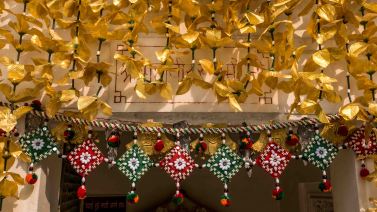 I did see a pair of footprints with yellow markings, but no yellow stone. I guess that these were not the actual remnants following Dada Gurudev’s cremation, but I didn’t ask.

There was a service going on in the large temple room, but most of the people inside were female, so I stayed outside. I just wandered around and enjoyed the calm, relaxing atmosphere. A young man offered me a ball of sweetmeat called “sukhadi”, which was delicious. They offered me lunch but it was just after 10am and I needed to get on to Qutub. 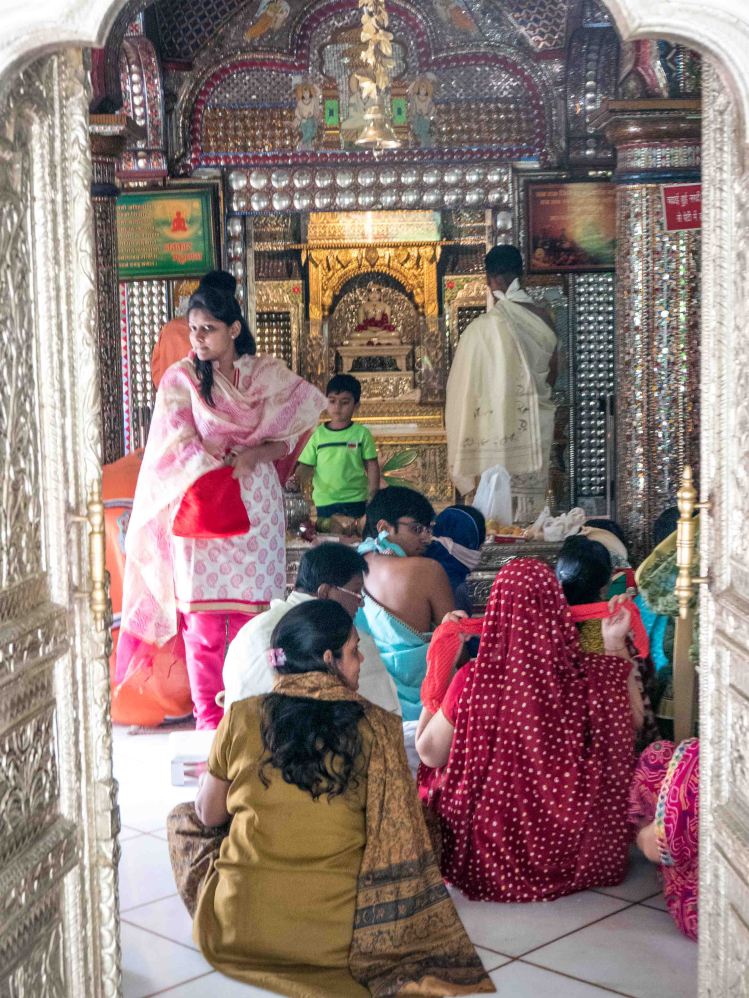 I left the temple, picked up my sandals and walked up the road. There were cars parked along the side of the road, but I saw one which had been placed on a rubbish tip. It was clearly abandoned, but instead of taking it to a breaker’s yard, it had been dumped with all the other detritus of modern life. I guess it must have seemed logical to the owner. 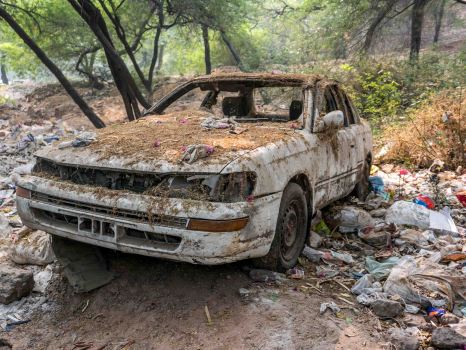 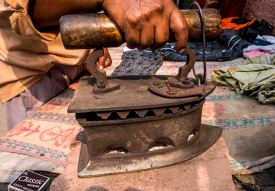 On my map it showed that there was a baoli, an Indian step well in the area. The well at Purana Quila was 85 steps deep. This on was less than a dozen steps deep. The water was green and filled with floating rubbish. I moved swiftly on.

I missed the Christian church (St John’s) and walked past another mosque which was in use. Outside a gurdwara, there was a man using a huge iron to press clothes. It had a compartment which he filled with red hot charcoal to keep it hot. He did a much better job than I do when I’m ironing.

There was another building on a rise at the top of the village which also looked like another abandoned mosque. I wandered inside, where there was a small cenotaph. A man with his family asked to take my picture, and I returned the compliment. 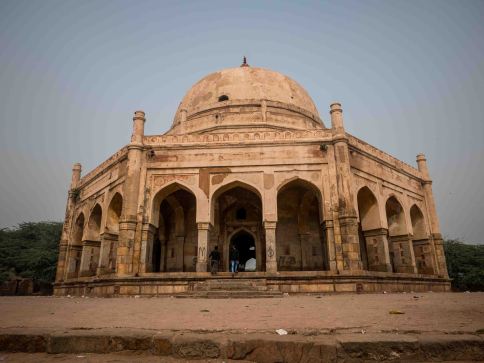 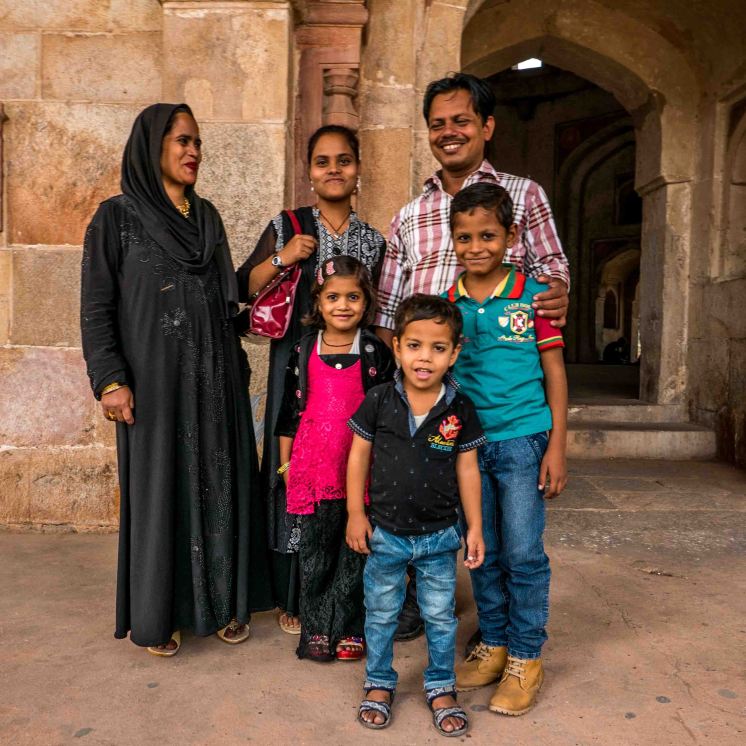 I ambled down the main street, outside the district courts. Seated at tables on the pavement were a dozen men with ancient typewriters. They could bash out a document for you in English and then notarise it for a very reasonable fee. Official stamp extra.  The man I spoke to claimed to type at 50 words per minute, which is about as fast as I ever was in typing class. We had a laugh about how big a Hindi typewriter would have to be.

A man approached me and shook my hand but could not speak properly. I realised that he was deaf and mute, so I tried some of the sign language which I had learned from YouTube last month when I attempted to communicate with a client at the clinic. My sign vocabulary has slipped from 50 words to about 10, but this was enough for us to become firm friends. We walked down the side of the road, stepping gingerly over the concrete blocks which covered the open drain. Most were solid and stable, but some were missing, cracked, or flipped up when you stood on them. I needed to concentrate if I wasn’t going to break a leg. 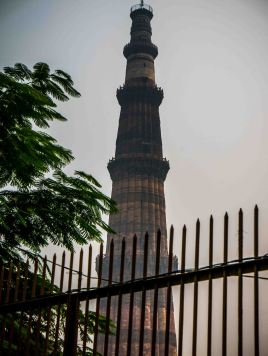 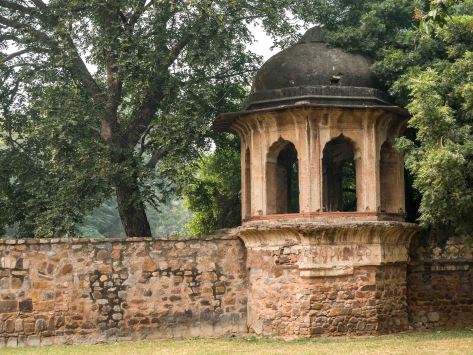 We got to the Qutub ticket office and it was chaos, packed with people. Four undisciplined queues snaked out of the booking area and along the road. The sky was dull, the light lacklustre. Photographs are bound to be rubbish. I thought that there must be a better time to visit and left.