There’s nothing quite like a bit of raga in the morning. Raga means “the act of colouring”, a metaphor for arousing love and desire, joy and delight. The improvised songs use between five and nine notes to form a melody. According to Wikipedia, “the way the notes are approached and rendered in musical phrases and the mood they convey are more important in defining a raga than the notes themselves”. Just what the doctor ordered, I thought.

After the Senior Citizens walk/jog on Sunday, I decided I needed a bit of culture, so I went to an Indian Classical Music concert at the Habitat Centre. I arrived early and found a seat in the amphitheatre, situated in the shaded courtyard.

The lady in the seat next to me told me that I was privileged to hear Dr Ashwini Bhide Deshpande sing. She is from the famous “Jaipur-Atrauli” Khayal Gayaki tradition of Indian Classical Music. Her original training was in biochemistry and microbiology, but she abandoned a scientific career to become a musician.

She arrived fifteen minutes late, then spent another fifteen minutes correcting the sound levels. Just before starting,  the organisers of the event presented her with flowers. Then we were off.

She was accompanied by Paromita Mukherjee on hand-operated harmonium. She was sitting in the shade on the right of the stage. Her vivid red lipstick was so striking that my attention kept being dragged to her, away from the singer. Vinod Lele was playing tabla in his usual lively style. Two other ladies accompanied Ashwini playing tanpuras and occasionally singing a refrain.

The tanpura is a fascinating instrument. The base is hemispherical, made from a hollowed out gourd. It has a long neck, with five strings, but no frets. The musician plucks the strings rhythmically and this keeps the singer from going “off key”.

The audience of 250 was 95% Indian. There were some French people behind me; a Chinese lady who applauded over-enthusiastically; an old Brit wearing the same Clark’s Active Air sandals I have, without socks; and a young man who looked like Gregg Allman from the “Eat a Peach” (1972) period. The Indians in the audience were mostly elderly. They were well dressed, with smart Nehru jackets for men and resplendent saris for the ladies.

Unfortunately, I didn’t catch the names of the ragas she sang for us. She is famous for her rendering of “Kabir Bhajans” (devotional religious songs), so I suppose this is what she performed. She repeated the lyrics over and over again, each time with a slightly different tone for each phrase. To emphasise the subtlety of this, Ashwini would slowly twirl the fingers of her left hand as she smiled or closed her eyes in reverie. Her right hand was plucking her tanpura. 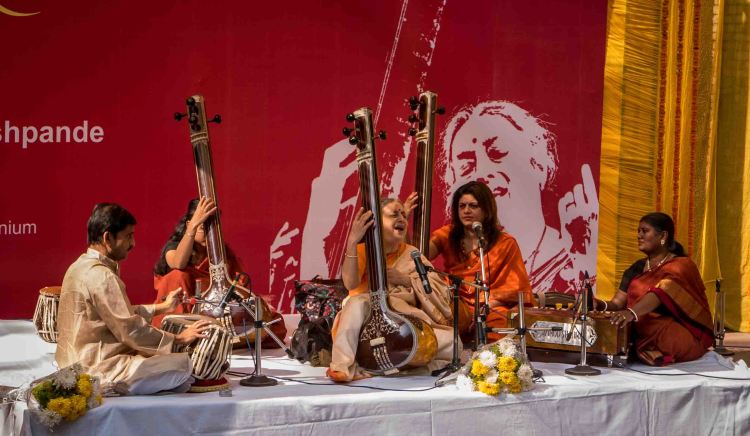 Once or twice, she stopped for a quick beverage. She made a comment to the audience, unscrewed the top of a steel thermos flask and poured herself a drink. On one occasion, she motioned to her vocal accompanist to carry one with the raga for a few repetitions until she could take over the lead again.

The ragas would gradually build up to a climax and then subside. I could see members of the audience copying her hand movements, almost as though they were conducting the concert. After a particularly beautiful section of singing, they would nod their heads laterally in approval. Clearly she had struck a chord in their hearts.

In a sentence, it reminded me of the permutations of Johann Sebastian Bach, with jazz improvisation in the style of Miles Davis, using the voice as a musical instrument.

Some younger men sitting in the back row were more interested in the brilliant tabla playing of Vinod Lele. They would be mirroring his rapid hammer-like finger movements on their thighs. Forget air guitar in India – this was air tabla.

Finally, the raga would come to its ultimate climax with the tabla and harmonium players speeding up.  Polite applause. She only sang four ragas during a two hour set, finishing at 1pm.

Afterwards, I wandered around the Lodi Gardens on my way to a Metro station. I was truly spell bound. The music was still pinging off the inside of my skull. I didn’t understand it intellectually, but I could feel it. It made musical sense to me. And that’s what it’s all about.

There are three clips I have uploaded to my Google Photo account which you can access at https://goo.gl/photos/uo8FiRXH5jHFXqMbA