Almost at the southern end of the Yellow Line on the Delhi Metro at Chhatarpur, there is a temple with a gigantic monkey god statue. I had to visit. Hanuman is one of my favourite gods. 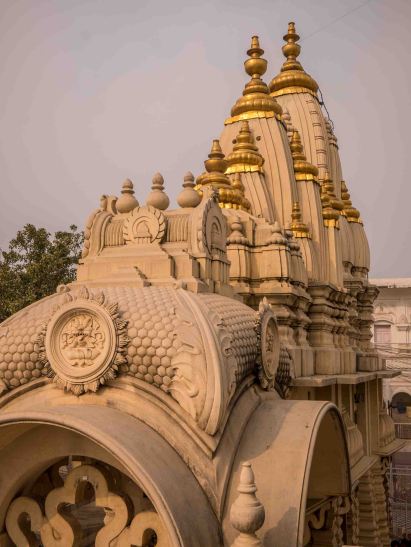 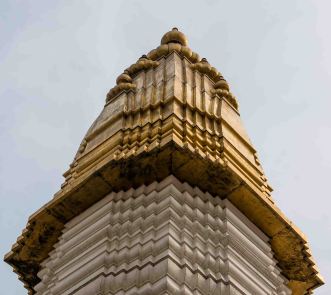 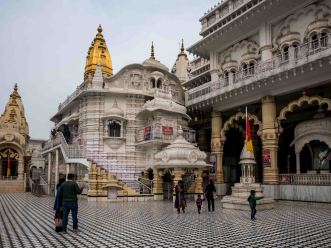 There are half a dozen different temples on the estate, covering 60 acres. Each temple has a different style. The main temple is dedicated to Katyayini, who is an avatar of Parvati, the consort of Siva. She is one of the nine forms of Durga. Young women worship her, fasting for a month, in order to get the husband of their dreams. Katyayini is also related to Kanya Kumari, the goddess at Cape Cormorin, the southernmost tip of India. Confused? So am I.

I didn’t visit at peak pilgrim time, during Navratri, so it was quiet. There was a holding pen for devotees to queue up in the shade while waiting to perform puja. I took off my shoes and stepped onto the cool black and white tiled floor of the temple courtyard. By the entrance, there was a sacred tree, adorned with swatches of red material, red being the colour associated with the goddess. 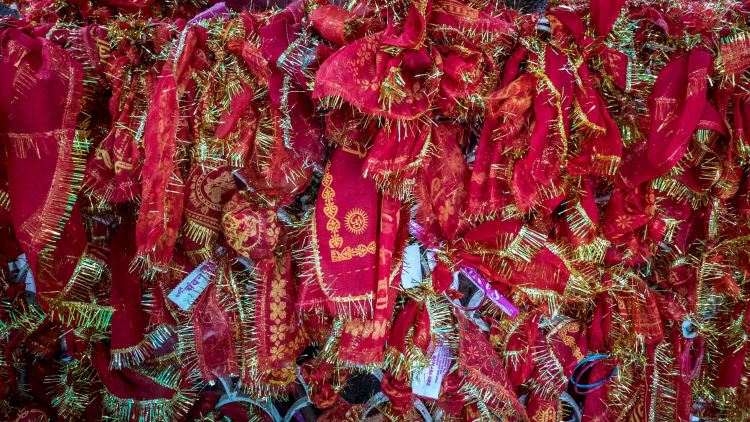 The temple is only 40 years old. It isn’t as massive as Akshardham, across the Yamuna.  The marble walls have fancy lattice work (called jaali) to allow light and air to circulate. Instead of having stained glass tell the story (as in European cathedrals), there are dioramas depicting scenes. All the signage was in Hindi, so I didn’t have a clue what was going on. 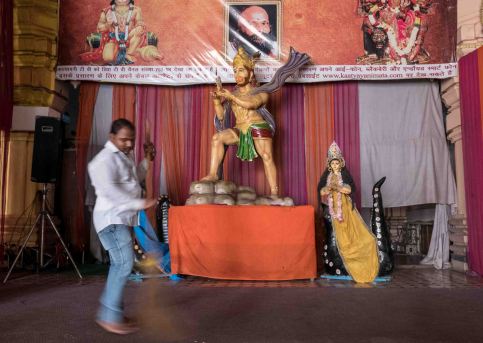 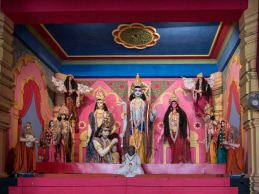 One interesting part of the temple was what looked like rooms from a private house. There was a dining room and a bedroom, with a silver dressing table and leopard crawling past the bed. 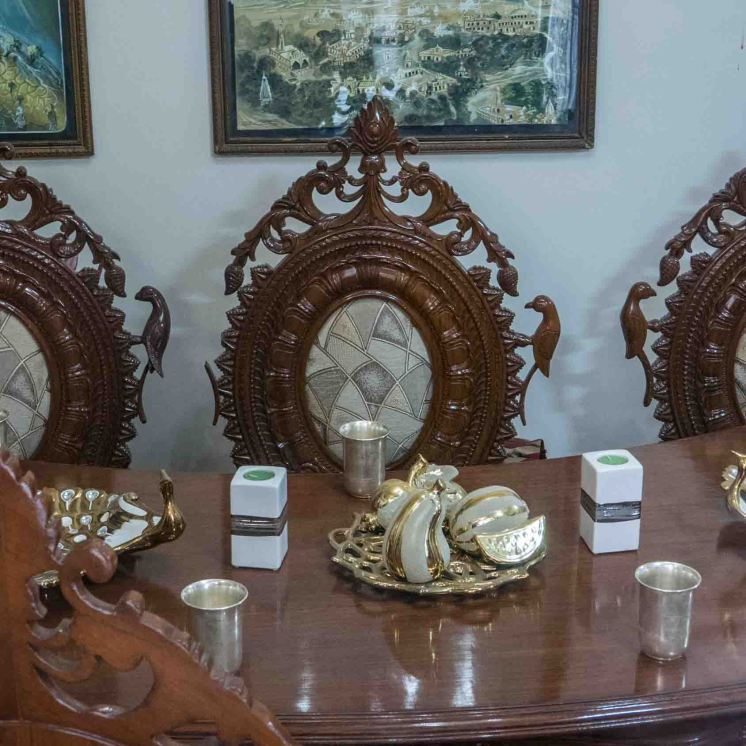 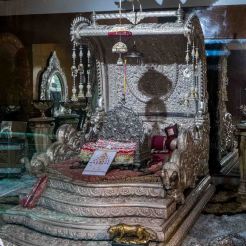 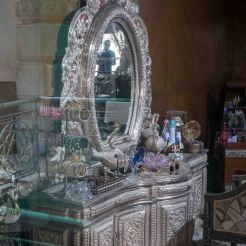 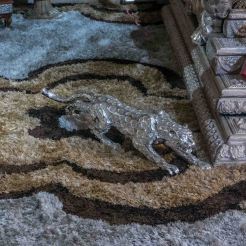 Baba Sant Nagpal founded the temple. I think this is his portrait. 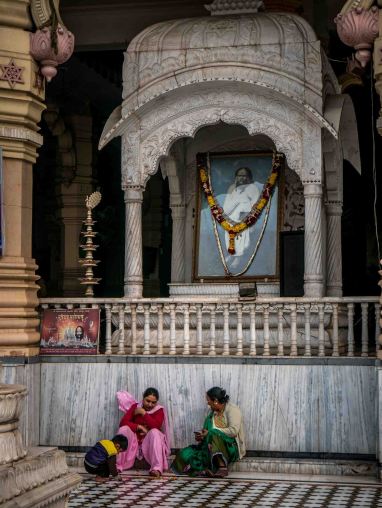 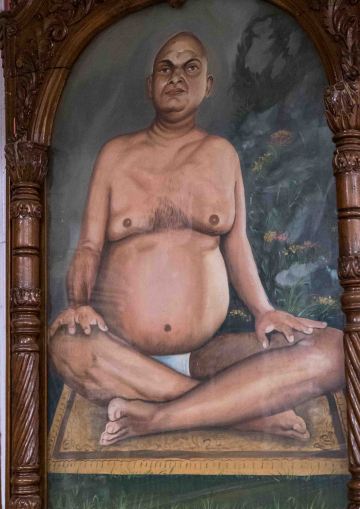 I walked through smaller shrines, dedicated to other gods, Radha/Krishna, Ganesh, Siva and Rama. Photography was not permitted, but I was given some sweets and had an orange dot applied to my forehead by one of the priests, perhaps as compensation. 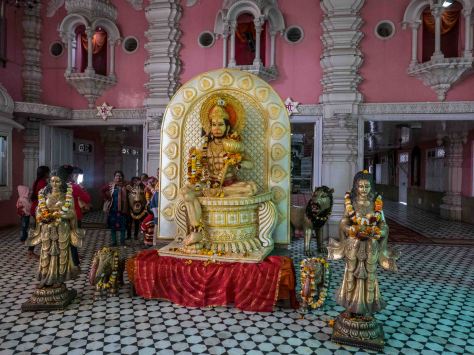 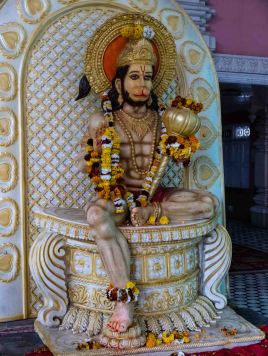 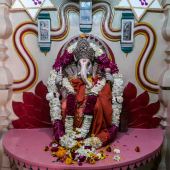 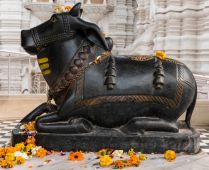 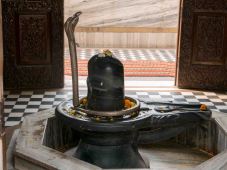 I crossed the main Chhatarpur Road and visited the Shiva Mandir and Baba Nagpal temple. The latter was extraordinary, with a garish colour scheme of cream and rose pink. Around the walls were images of Katyayini/Kali with progressively more arms. She starts off with two in the first image and as you walk clockwise around the upper floor, the images sprout more limbs, ending up with twenty arms. The more arms, the more weapons and severed, bloody heads. No photography was allowed, probably just as well. 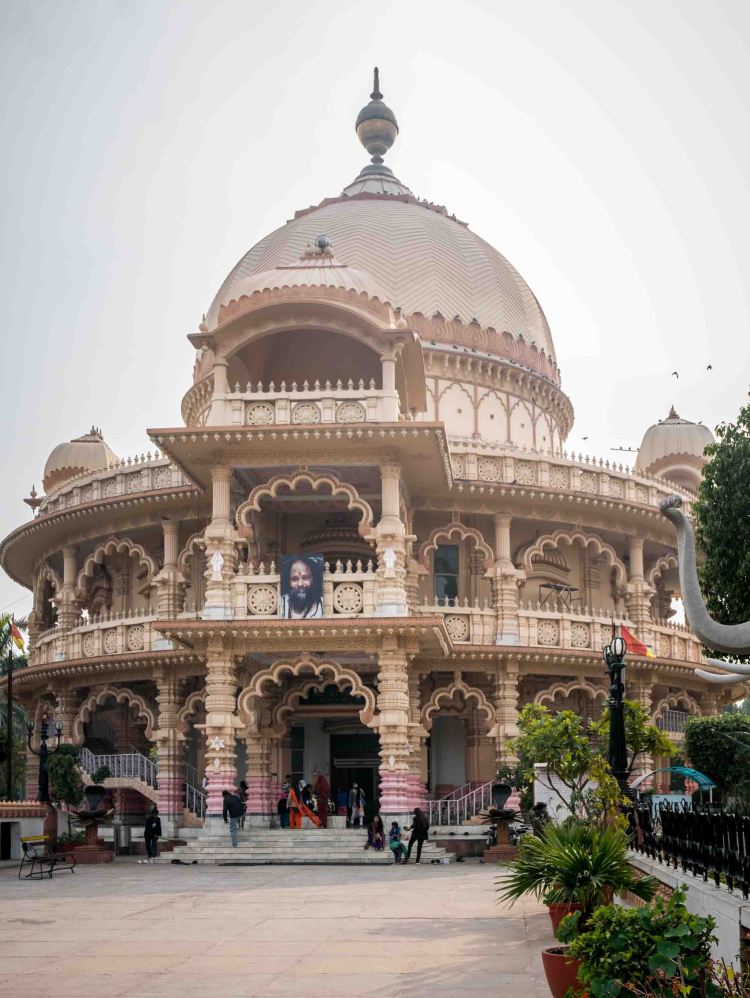 At the Shiva Mandir there was a preposterous set of blue doors, bigger than any I have ever seen. I couldn’t open it because it was locked by a massive padlock. But it didn’t seem to lead anywhere. 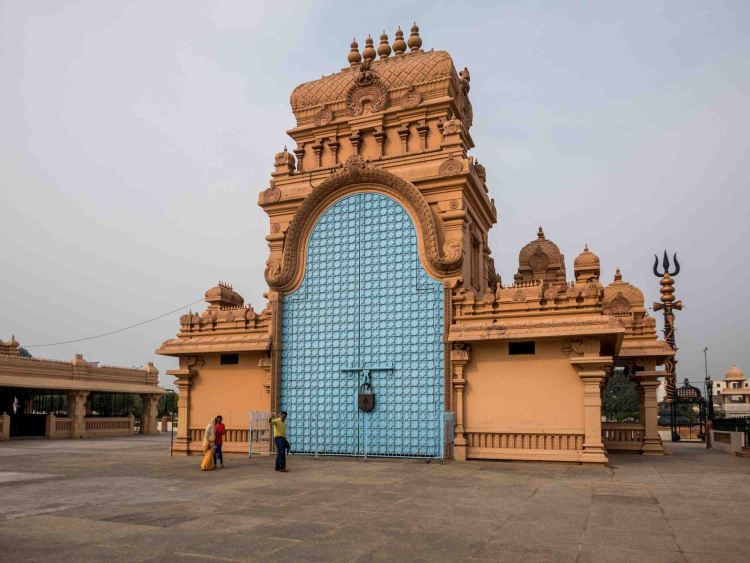 I walked through the complex to the Hanuman Statue, what had attracted me to the temple in the first place. It is a colossus in orange, on a plinth, with pigeons trying to fly up under his loin cloth to roost. 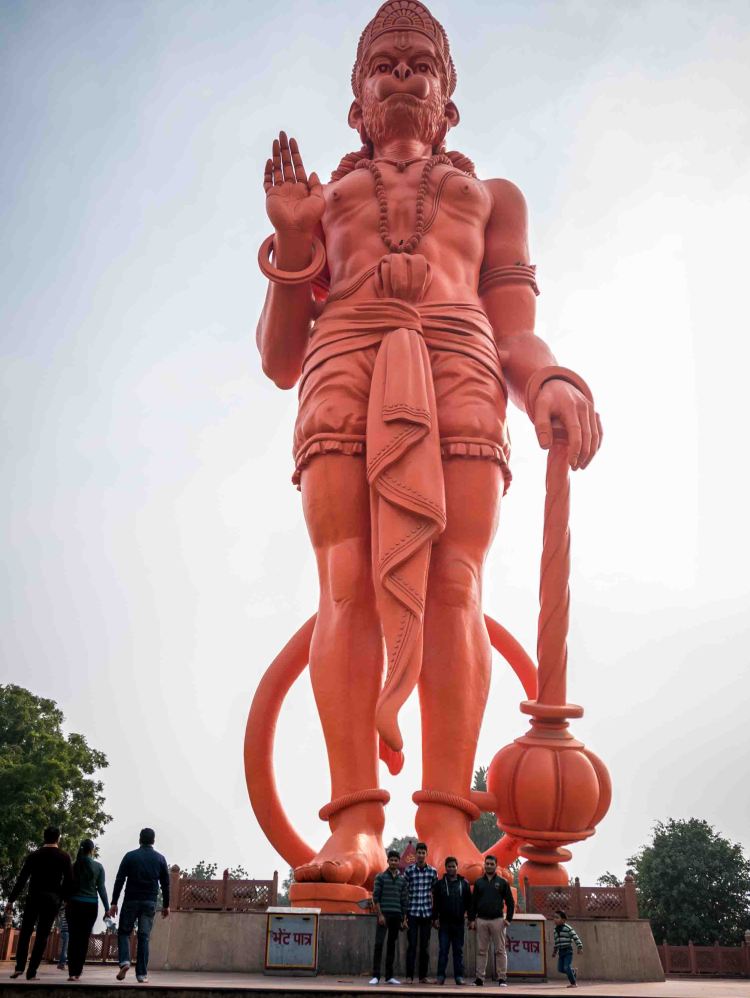 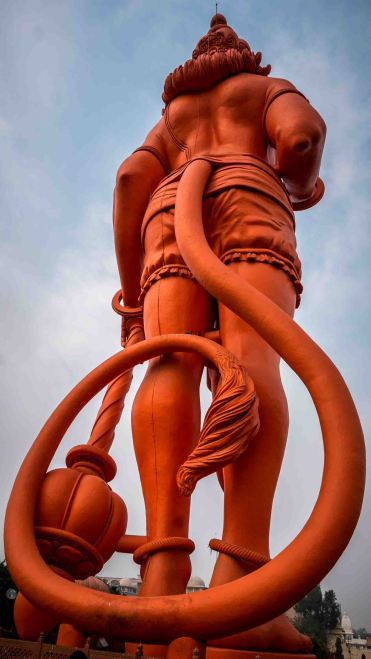 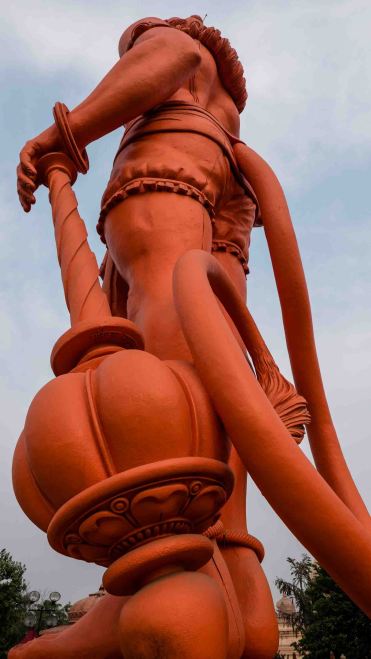 Across the road is a South Indian temple, the Laskhmi Vinayak Mandir. This was closed so I could only take pictures through the wrought iron gates. 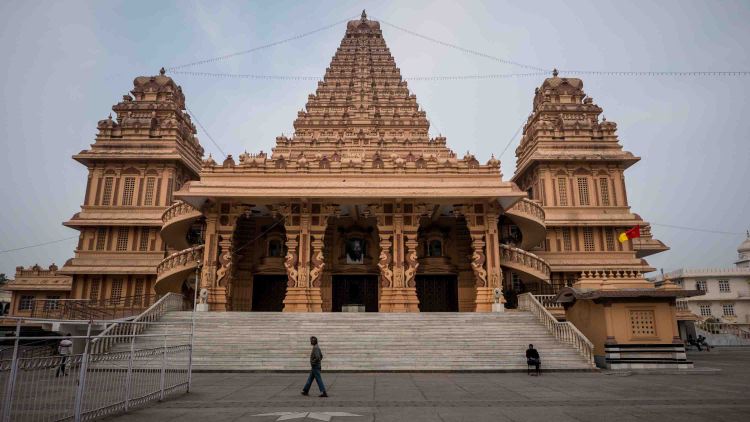 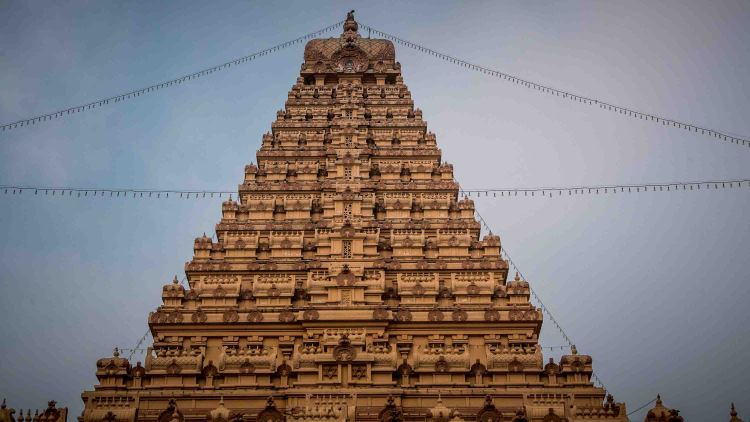 Close by the temple complex there were ashrams, schools of meditation, yoga and a hospital. It reminded me of London teaching hospitals – St Thomas’s or St Bartholomew’s, connecting medicine with religion. There’s a bit of hocus pocus going on, too. 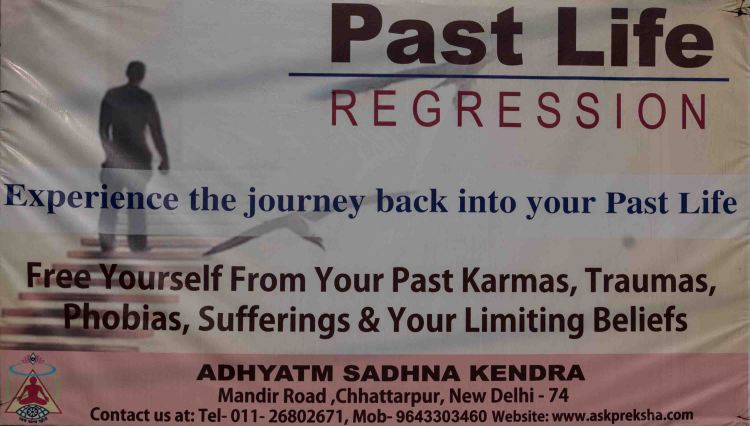 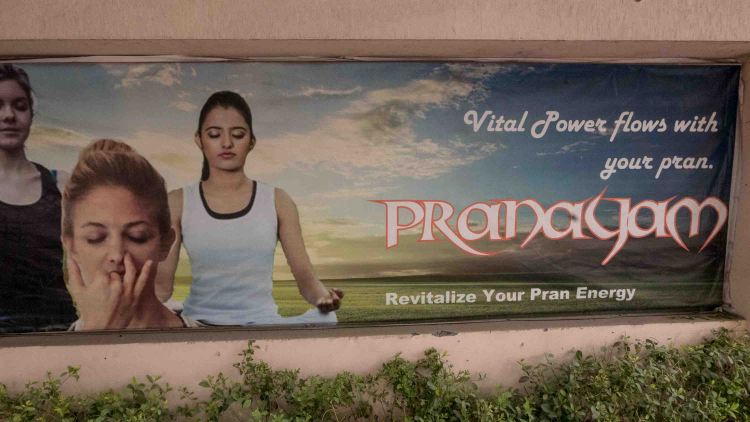 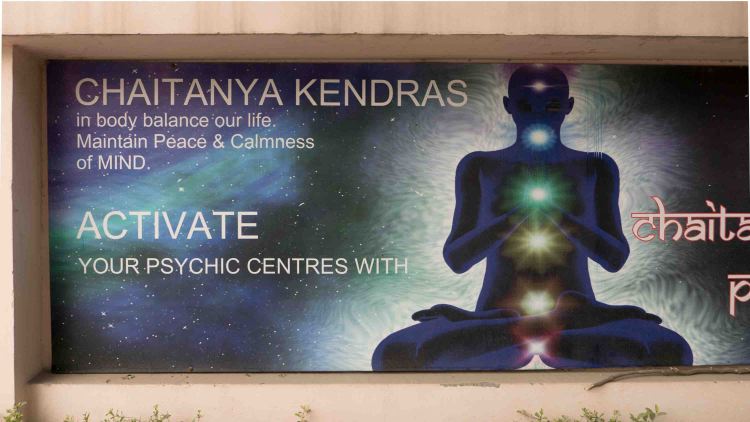