“Lal Quila” means Red Fort, because of the magnificent red sandstone walls. When it was constructed in the early 17th Century, it was known as the “Lal Mubarak”, or Blessed Fort. The Moghuls ruled their diminishing Indian Empire from the Fort for two hundred years before the disaster of the Mutiny in 1857 (known here as the Second War of Independence).

It is a marvel of Moghul architecture. Sadly, when the British troops took over the fort following the siege of Delhi, it was ransacked. Semi-precious stones were prised from their marble settings. Beautiful buildings were torn down to make way for army barracks. 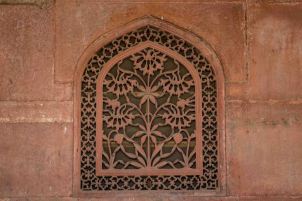 Parts of the Fort are in a sorry state of disrepair. But the quality of the workmanship in the carving of windows and walls of red sandstone is superb. 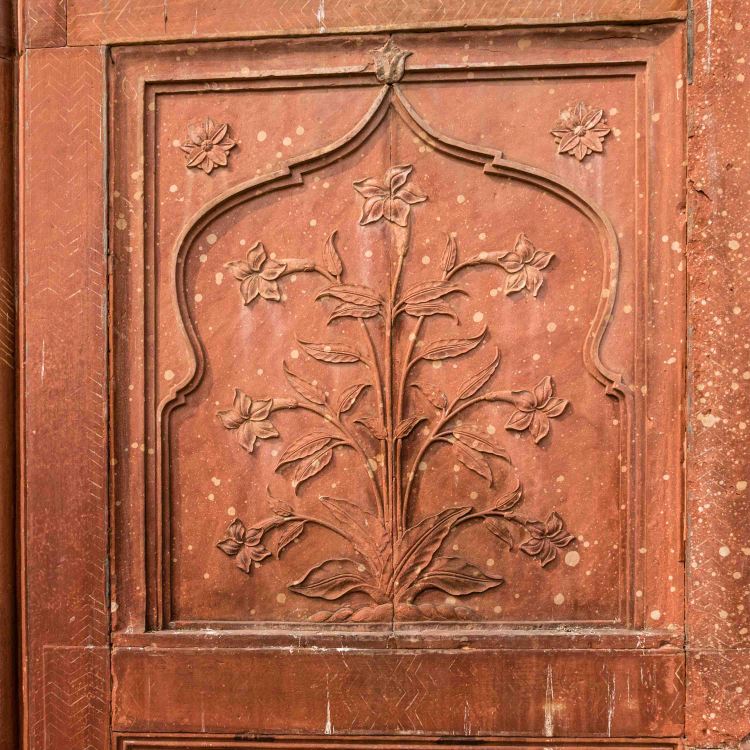 During May and June, temperatures soar in Delhi. The Moghuls used water and white marble to stay cool. This is a beautiful pavilion with a water feature on the back wall, channelling the flow to the edge of the plinth and into a shallow canal. Lighted candles would have been placed in the alcoves behind the flow of water after dark.

The inlay work (pietra dura) depicting flowers is wonderful. Much of this has been renovated sensitively. The third image below is the underside of an arch. It probably has not been touched for 200 years so it looks a bit forlorn. The cornflower blue still stands out. 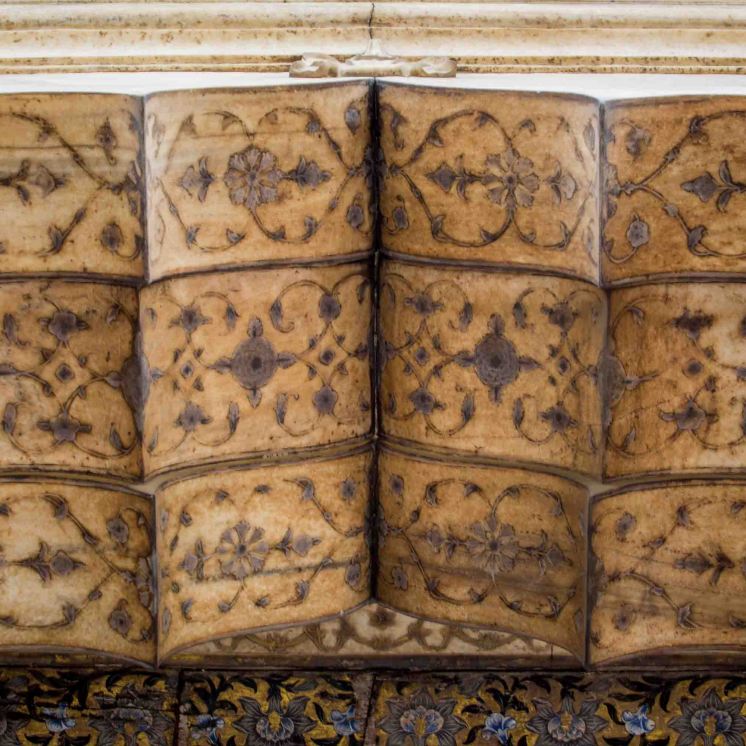 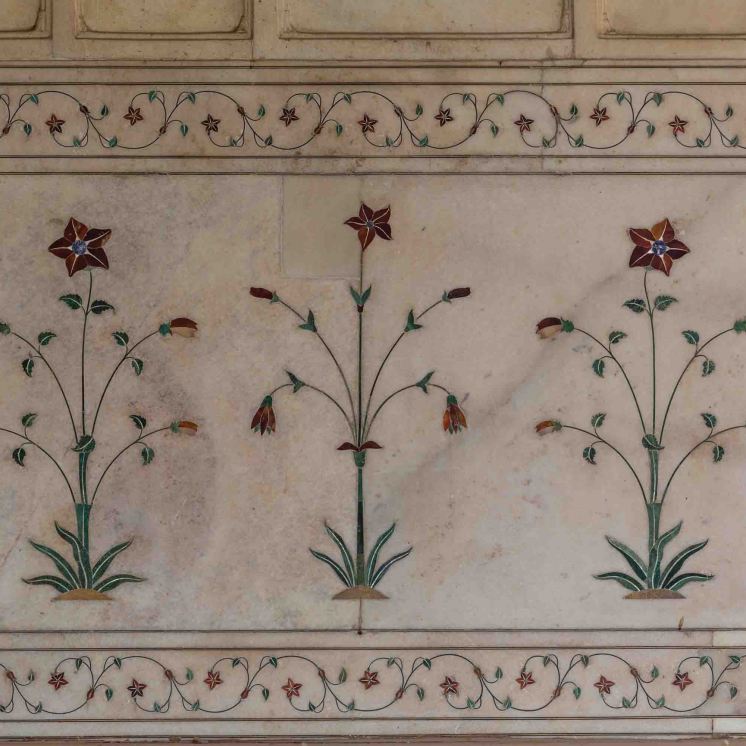 The barracks are ugly, but still in use during special occasions when the military presence in the capital is beefed up, at Independence Day, for example. Families must have been billeted here because there are the remains of a school. The walls of the classroom still have remnants of nursery rhymes and the alphabet.

The Lahori Gate leads onto a covered bazaar, where one can buy trinkets, slippers and “antiques”. When British troops entered the fort at the end of September 1857, some mutineers took pot shots at them from balconies above the shops. The British dealt harshly with rebel sepoys who had “taken the salt” (pledged loyalty to the East India Company). On the spot where the mutineers had hacked to death European women and children who had been imprisoned in the fort, Moghul princes were hanged in reprisal.

The Fort originally had a moat, with water diverted from the River Yamuna. There is even a small “river gate” which now opens onto a garden as the course of the river has changed. There is a step well or baoli to provide water for the defenders of the Fort during a siege. There is also a lovely classical bungalow (similar to the Lutyens buildings in New Delhi). 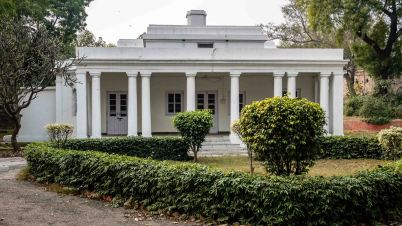 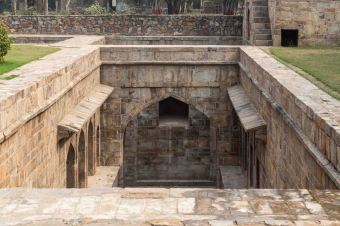 The walls of the Fort have had some tasteful renovation. The crenellations have loopholes allowing defenders to shoot down on attackers at different angles. Some loopholes are covered by a stone cap, presumably to provide additional protection. The merlons are scalloped more for decoration than to protect the defenders.

The neighbouring Salimbagh Fort (which is actually a hundred years older than the Red Fort) has more solid walls. It is a huge mound of earth (which used to be on an island in the Yamuna), clad with stone. It was a high-security prison during the Second World War, housing captured commanders of the Indian National Army.

After the Mutiny, the British built a railway into Old Delhi from the east, passing Salimbagh and cutting a corner off the Red Fort. A footbridge over the tracks has crenellated walls of iron plate. It needs to be painted regularly. I wonder if this man is slapping on “red lead” paint (lead tetroxide and calcium plumbate) to protect the steelwork from corrosion. 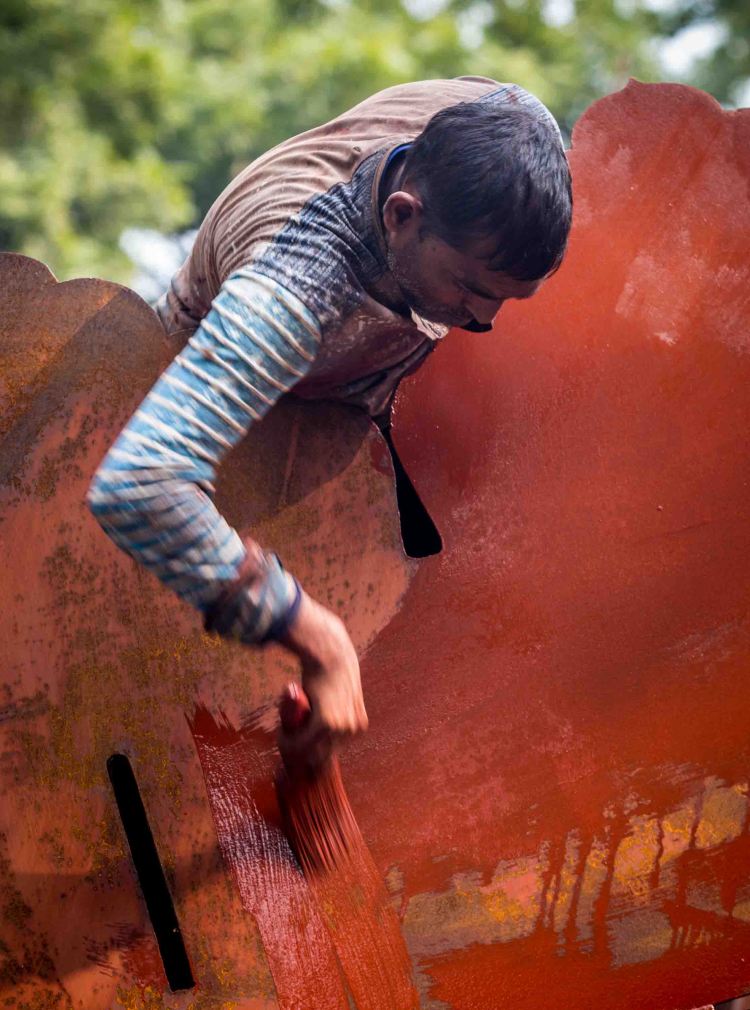