It was pitch black when we emerged from Chawri Bazar metro station at 6:15am on a Sunday morning. There are no street lights in the Walled City of Shahjahanabad. But people were awake, huddling around braziers to get some warmth into their bodies before starting the day’s toil. I led my intrepid colleagues down the dark alleys. They had confidence in my inner compass to guide us to the meeting place, because I had been here before. But that was in daylight. So I followed my nose. This wasn’t easy either, considering the stench of the open drains.

It was even too early to buy chai. We stepped over sleeping bodies and dogs, tiptoed around pools of strange liquid, piles of festering rubbish and squeezed past parked trucks. We had arranged to meet the organisers of “Delhi by Bike” at 6:45am at the Delite Cinema (sadly now crumbling into disrepair). Priyanka greeted us and we chose our bikes. They were heavy mountain bikes with chunky tyres – perfect for the flat, partly-paved streets of Old Delhi.

At 7am we cycled Indian file (I couldn’t resist writing that) into the labyrinth of lanes and alleys. The sunrise had tinged the smoggy sky with pink, so we could see where we were going, without using lights. Almost immediately, we turned off the beaten track onto a winding path – what we in Leicester would call a “jitty”. We had to dismount several times to go down some steps. I desperately wanted to stop and take photographs of the old buildings and havelis, but every time I slowed down and looked around, the cyclist behind me nearly crashed.

We rejoined the main drag and I recognised where we were. We cycled past the marigold sellers outside the Fathepuri Mosque (Masjid) on the corner of Khari Baoli and Chandni Chowk, and stopped at the spice market. Men were stooped over carrying large sacks of dried chillies and fragrant seeds down a narrow, dark passageway. (I don’t think the men were bent over because of a heavy load; it was just that the sacks were so bulky that they were best carried on the upper back, rather than the shoulders.) 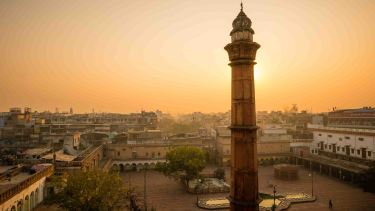 We followed them and turned to the left, climbing half a dozen flights of stairs to emerge onto a flat roof. To the west was a jumble of shacks in a huge courtyard, where spice merchants stored their goods. To the east, the sun was streaming through the smoke of early morning fires in Chandni Chowk and flooding golden light into the masjid. Photographers’ Heaven. 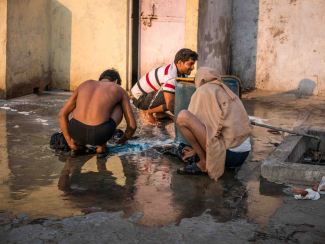 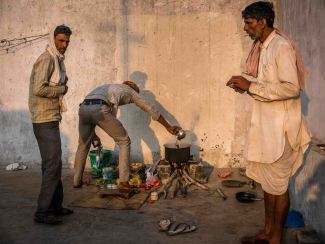 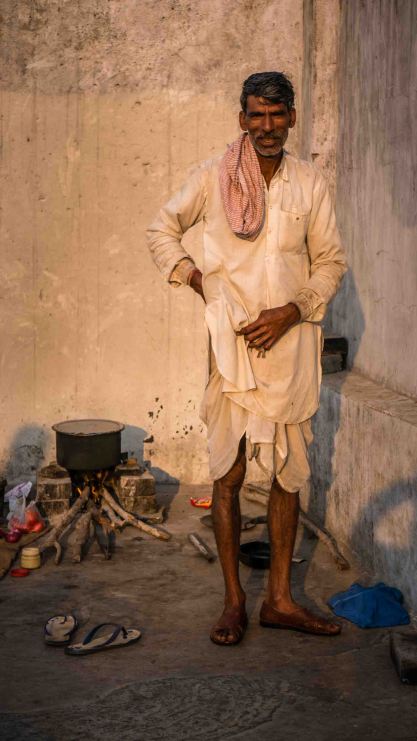 I walked around the roof, taking pictures of the ramshackle buildings, people doing their laundry, taking a bath, boiling up milky tea in blackened cooking pots, reducing masala to a thick sauce in a shallow pan, or simply checking their messages on WhatsApp.

The chilli dust in the air had scoured my nasal sinuses, but this meant the fine, pungeant powder had a clear passage down to my bronchioles. The dust made us all wheeze, cough and splutter. We needed our whistles wetting. It wasn’t even 8 o’clock and we still hadn’t had chai.

We cycled north, took a side road past the Lieutenant Governor’s official residence, and parked up outside a popular chai stall, built into the wall of a Hindu temple. The temple had toilets, so we took off our shoes, walked across the concourse and then realised that we would need our shoes again if we were going to use the toilets. The facilities were basic. I went around the corner to wash my hands and saw a massive bowl of cow shit by the sink. Holy crap. 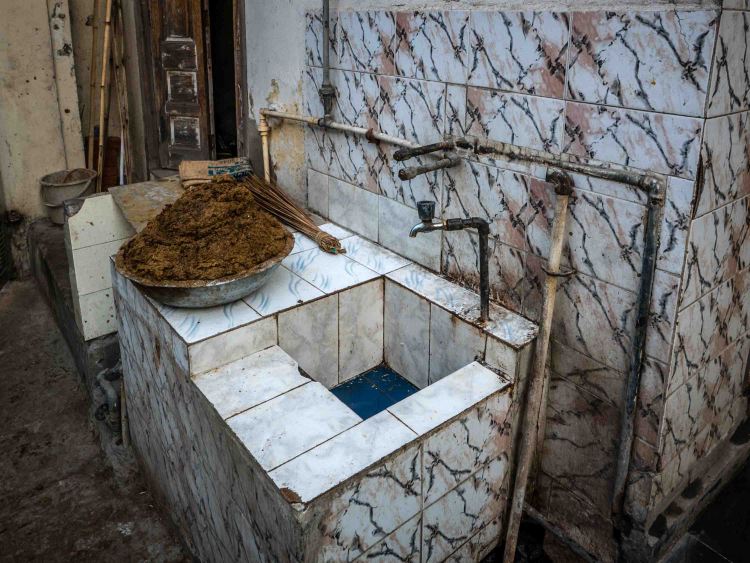 The tea was disappointing, but I gorged on shortbread biscuits with chocolate chips and namkeen from the chai wallah. Cycling boosts your appetite. We cycled south, past the railway station, through the gangs of daily wage labourers waiting to be employed, down by the town hall to reach Chandni Chowk. 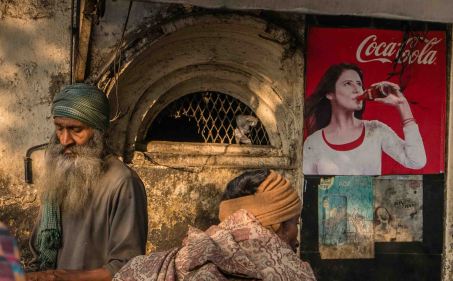 It is difficult to believe that this boulevard got its name from the reflection of moonlight from a central canal illuminating the facades of aristocratic houses. Sigh. Even before 9am, it was bustling with activity verging on mayhem.

We crossed the street and pedalled down Parantha Gali and through the lanes to the Jama Masjid, Delhi’s largest mosque, constructed in 1648. We went on to eat breakfast of mutton curry and Khameer naan bread at Karim’s backstreet restaurant. You might scoff (we certainly did) at having this for breakfast, but it was melt-in-the-mouth delicious. We ate some sweet thick slabs of bread before cycling back to the Turkamen Gate and the Delite Cinema, marking the end of our tour. By now, the streets were filling up with people, donkeys, horses, goats, rickshaws, food carts, scooters and motorbikes. The golden hours of cycling had vanished and it wasn’t even 11am. 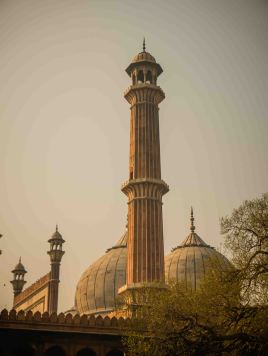 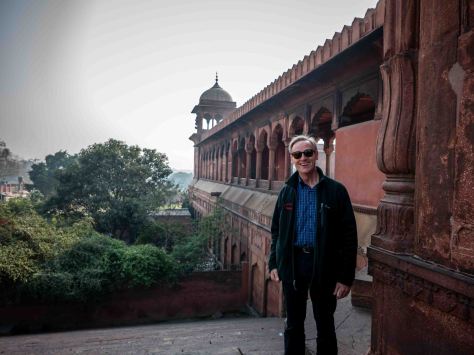 We were exhilarated. Our route had taken us back and forth across the Old City. It had whetted my appetite for more exploration and I was already making plans to return with a better camera and longer lens. Cycling is great, but unless you are wearing a GoPro camera on your helmet, you can’t take photos while riding.