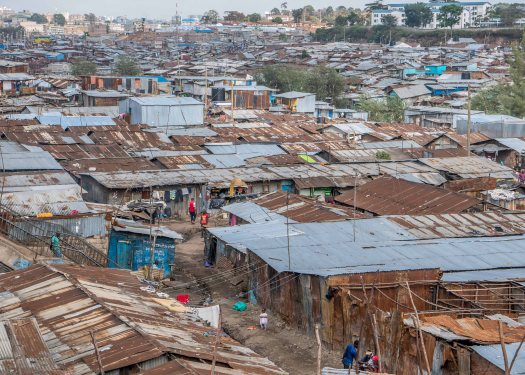 These two blogs provide more information about the Mathare Valley Slum which I visited last week as a guest of MSF. MSF recruit their community workers from the slums. Alphonse and Juma escorted our group through the slum for two hours. Perhaps because we were all wearing MSF tee shirts, we were warmly welcomed and I felt no hostility at all.

Everywhere we went in the slum, there were groups of (paid) volunteers, cleaning up the stinking rubbish in the streets, dredging filth from the Mathare River and planting vegetables in old sacks. 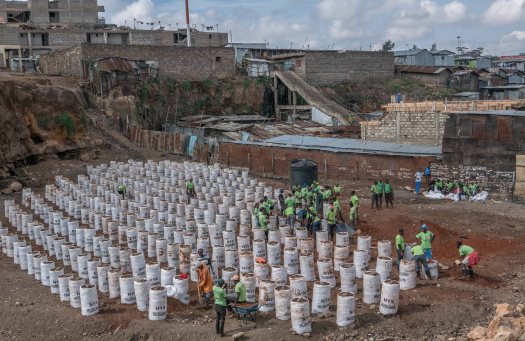 The shacks are made from recycled corrugated iron, wood and plastic sheeting, built on compressed rubbish. Wherever there is a space, someone has built a home. One of the main tracks bisecting the slum is being made into a road. Within a few months, the volunteers should have started laying tarmac to seal it. Along the main tracks there are shops selling essential goods. Many people have set up fast food stalls, using start up funding from microfinance loans. You can buy chapatis, roasted corn on the cob, barbecued meat (mainly intestines) and fruit.

Electricity power cables are strung across the slum like a gigantic spiderweb. You can buy a month’s supply of power and sublet the connection to a dozen other households as a money-making venture. There are video theatres and sports bars where people can pay to see a film or watch Premier League Football live on big screens. Each zone of the slum has a toilet block, built with funding from Rotary or Swedish Aid. Having a pee is not free, so most people just hunker down in a side alley to relieve themselves. 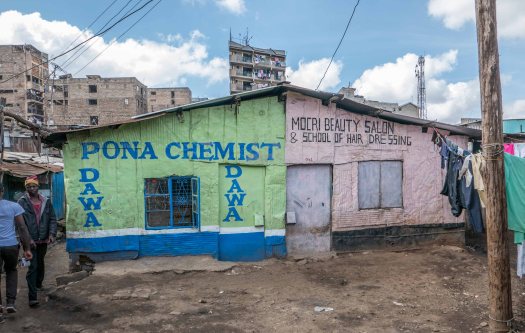 Down by the river there are illegal stills, producing “vodka” from molasses. Our escorts told us not to take any photographs of this activity as it may trigger a police raid and violence between tribal gangs vying for control of the product. A small bottle of changaa costs 10 Kenya shillings (7p or 10 cents).

Although there are a few government clinics in the slum, many people get their health care from private pharmacies. There are only three government schools. I was surprised by the number of private schools flourishing in the slum. The entrepreneurs setting up these primary schools aim to earn enough money to expand into larger premises, where they can charge higher fees for teaching older pupils.

I expected Mathare to be like one of the nine circles of Hell in Dante’s Inferno. It was filthy and it stank, but it was bustling with life and economic activity. I suppose those people who didn’t make money (legally or illegally) did not survive. The people were friendly and smiling, not downhearted and miserable. The school children wanted to practise their English. Shopkeepers were keen to attract you to their stores. The volunteers were proudly cleaning up the rubbish. It was less horrible than I had imagined, but I could not survive living on US $1 per day, sleeping on cardboard in a 2 x 3 metre shack, with no running water or toilet facilities close by.

“The human spirit is indefatigable and that resilience is best nourished through taking action.” Anna Ortega-Williams.

London has its distinctive red, double decker RouteMaster buses; Manzini has white Toyota kombis with bizarre names; Nairobi has multi-coloured buses extravagantly decorated with popular film and rock stars. Some look like regular luxury coaches, but others have been built from the ground up, using purloined Isuzu truck engines, with a more customised appearance and a sound system to match.

The traffic in Nairobi is already grid-locked during the rush hours. It is going to get worse as the number of vehicles on the city’s roads doubles every six years. Early on Friday morning, it took us over two hours to drive 30 km.

This past week, I have been learning more about organising a Sexual and Gender Based Violence Service at Masai Lodge, about 25 km outside Nairobi. The highlight of the workshop was a trip to the Medecins Sans Frontieres programme in the huge Mathare slum, on the eastern outskirts of the capital. Half a million people live in this slum. It extends north, forming a border with the fancy suburb of Muthaiga. Last year, the MSF clinic helped more than 2,500 people who had been raped or sexually assaulted. We don’t call them “victims”; they are “survivors”.

Wearing our distinctive MSF tee shirts, we walked along the main road bordering Mathare zones 2 and 3. Alphonse, an MSF community worker who grew up in zone 3 of the slum, told me I could take photographs if I asked permission. I took these photographs of matatus before it was pointed out to me that I couldn’t get permission from a moving target.

Kanye West, Michael Jordan and James Bond (Daniel Craig version) are popular subjects for Matatu art. Some are decked with under-chassis blue lighting and light-emitting diodes. I was reliably informed that public transport in Nairobi had been privatised, but these matatus act more like privateers.They are licensed to travel between two destinations, but there are no price controls. Indeed, when it rains, the ticket prices double. The city has unsuccessfully tried to regulate the decoration of matatus, the volume of music being played, and even limiting how garrish the conductors’ shirts can be.