Soka Uncobe is the slogan of the Male Circumcision (MC) programme which began in 2008 in Swaziland. A Task Force led by the Ministry of Health aimed to integrate male circumcision into the services of all hospitals and health centres. Its ambitious target was to circumcise of 80% of men in the 18-49 age group by 2013. Another programme came on stream in 2011, aiming to circumcise 50% of all male babies born in hospitals by 2014.

Mass campaigns are very costly. After the initial push, health facilities were encouraged to integrate MC into their routine work, saving lots of money. The organisers naively thought that this could be done without disrupting normal health services. This thinking is very reminiscent of the NHS, where additional work is dumped into primary care on the assumption that its capacity is limitless.

To boost the flagging programme, MC champions were appointed in the Parliament, schools and Chiefdoms. Twenty-six doctors and 83 nurses have learned the new WHO-approved surgical method. Only 2% of operations resulted in significant adverse events, such as excessive bleeding, infection and damage to the penis. In South Africa, I read a newspaper article which claimed that 22 males had had their penis amputated following complications of circumcision, but I have not heard of any cases in Swaziland.

Older men have not been excluded, but will not be priority cases. The circumcision of newborn males will continue after this “catch up phase”. Another cadre of health workers (45 doctors and 78 nurses) has been trained to circumcise babies using the Mogen Clamp.

I went to a Centre of HIV and AIDS Prevention Studies (CHAPS) event last month which was promoting MC in the private sector. Circumcision is free for the patient, but the private doctor collects a bounty of 700 Rand (£40 or US$60) for each case. The equipment is provided free of charge and there may be some assistance for private clinics to expand (staff, equipment, rooms) to take on more circumcisions. This is presented as a good business proposition, a money-making venture which will also improve the facilities and reputation of the private clinic. Private GPs must undergo rigorous training at an approved centre and perform at least ten circumcisions. USAID is providing most of the financial support.

The whole point of male circumcision is to reduce transmission of HIV to men. Removing the foreskin to expose the tender skin of the glans penis makes it tougher. The soft skin becomes keratinised, so it is less likely to get damaged during sex. Broken skin gives viruses a portal of entry. By my way of thinking, less broken skin should also reduce transmission of HIV from infected men to non-infected women during sex, but this has not been shown to be the case. Whilst men are recovering from the operation, they are more susceptible to HIV infection through the surgical wound. The official advice is “six weeks off games”, but most men I have spoken to would find that an impossible restriction on their sex life.

Unfortunately, MC does not protect men who have sex with men from HIV infection, but the reasons for this are unclear. Most American males are circumcised but the incidence of HIV infection is higher than in UK, where few males are circumcised. MC may provide some protection against herpes, but not against the commonest sexually transmitted infection I see in Matsapha – gonorrhoea. I have heard that some wily men who have HIV want to get circumcised as they think new girlfriends will regard them as low risk, and not insist on them using condoms.

In 2000, the London School of Hygiene and Tropical Medicine suggested that circumcision was associated with reduced risk of HIV infection. Three years later, the Cochrane Collaboration examined 35 studies and didn’t think the case was proven. To settle the matter, WHO/UNAIDS commissioned three randomised controlled trials in Africa. The trial at the Orange Farm district of Johannesburg in South Africa reported that circumcised men were 60% less likely to contract HIV. Trials in Kenya and Uganda showed similar findings, and were stopped on ethical grounds.

Even putting all the data from these three trials together (over 11,000 men were involved), the results are still not clear in my mind. The studies showed the risk of contracting HIV for circumcised men is at least half that of uncircumcised men over a year. But what about in ten years from now? One meta-analysis examined the trials and stated that to prevent one new infection of HIV, 72 males would need to be circumcised. WHO and UNAIDS mathematicians modelled the same data and came up with a different figure of between 5-15 circumcisions per HIV infection avoided. This is very cost effective compared with the price of anti-retroviral drug therapy. However, condom use is almost a hundred times more effective than male circumcision at preventing HIV infection. And of

course, circumcised men would need to continue to have safer sex to maintain the protective benefit.

The local newspaper ran a story about circumcision interfering with an arrangement for warriors to collect urine (the imvunulo) when they are taking part in long ceremonies wearing traditional dress. I am not sure how this contraption works, but I doubt the foreskin is essential for its use. Circumcision used to be part of the rite of passage of becoming a warrior in Swaziland. I heard that the custom fell out of favour because the King needed as many warriors as he could muster and too many men were “on the sick”, recovering from the traditional procedure.

On rare occasions, voluntary medical male circumcision (VMMC) turns out to be neither voluntary nor medical. In this newspaper article, a woman discovered her paramour taking a WhatsApp message from another woman. Was it his wife or another girlfriend? We will never know. Hell hath no fury like a woman scorned. She bit off his foreskin during oral sex. Ouch. No chewing gum jokes, please.

The slogan used to 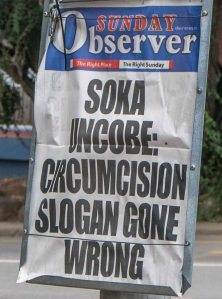 promote MC in Swaziland translates as “Cut and Conquer (HIV)”. Perhaps this has given the wrong message to many young men who feel that once they have been circumcised, HIV has been defeated and they no longer need to use condoms. Our health counsellors blame the Americans for thinking up a snappy slogan and not consulting lots of Swazi men to find out what they understood by Soka Uncobe. “Cut and Reduce Your Risk Of HIV, But You Still Have To Wear Condoms” isn’t such a slick catchphrase.

Much better is Zambia’s slogan: “Shield and Spear”.